The so-called ancient astronaut theory proposes that extraterrestrial beings visited the earth in prehistoric times and were responsible, directly or indirectly, for ancient cultural achievements. To support this claim, ancient astronaut theorists rely upon three fundamental pillars of evidence: ancient architecture, ancient art, and ancient texts. It is the last of these three pillars that I would like to examine here.

The value of what ancient astronaut theorists (AATs) refer to as “ancient texts” (in reality a stew of poetry, prose, oral history, and later missionary or anthropological reports) cannot be underestimated. When they are not outright fabricating them, AATs believe that these ancient texts are a literal record of prehistoric events. According to these theorists, ancient people were something akin to stenographers, incapable of recording anything than the literal truth about what they saw and experienced, though some distortion may have occurred later in time. The theory’s most prominent proponent, Erich von Däniken, explained this idea in the theory’s key text, Chariots of the Gods?, in 1968:

The key to this phrase is, of course, the “if” clause.

Similarly, Giorgio Tsoukalos, the head of the Archaeology, Astronautics, and SETI Research Association (AAS-RA) and a talking head and “consulting producer” on the History Channel’s popular Ancient Aliens documentary series, put it this way:

The key issue in the ancient astronaut theory’s view of ancient texts is that where the gods appear, the gods are aliens. Humans are unable to entirely comprehend these aliens and attribute to them godlike power. As von Däniken wrote in Chariots, the first humans “had tremendous respect for the space travellers. Because they came from somewhere absolutely unknown and then returned there again, they were the ‘gods’ to them” (p. 52). Their spaceships, of course, were titular flaming “chariots.”

So, what becomes of what von Däniken himself admitted was “speculation” if the ancient texts fail to support the idea that the gods came from the sky in fiery spaceships?

Let’s look at some “ancient texts” and find out.

Of course this is merely one god, and an obscure one. Surely, the Greek gods, whom von Däniken claimed were extraterrestrials in his 2000 book Odyssey of the Gods, and whom Giorgio Tsoukalos announced on Ancient Aliens lived in a flying saucer on Mt. Olympus, have better support in the “ancient texts” for their extraterrestrial bona fides?

But perhaps this is too recent (though it should not be since von Däniken has no trouble in Chariots citing Norse sagas from 1200 CE as “ancient texts” recording prehistoric traditions). Let’s look at what Cicero (106-43 BCE) has to say in De natura deorum (3.53), where the Republican Roman orator relates “the theory that these gods, who are deified human beings, and who are the object of our most devout and universal veneration, exist not in reality but in imagination” (trans. H. Rackham).

Such a philosophy derives from the work of the fourth century BCE Greek mythographer Euhemerus whose books, unfortunately, do not survive. His ideas, however, were preserved in the works of Diodorus Siculus and Plutarch, who explains that Euhemerus spread atheism "by describing all the received Gods under the style of generals, sea-captains, and kings, whom he makes to have lived in the more remote and ancient times, and to be recorded in golden characters in a certain country called Panchon…" (De Iside et Osiride 23, Goodwin translation). 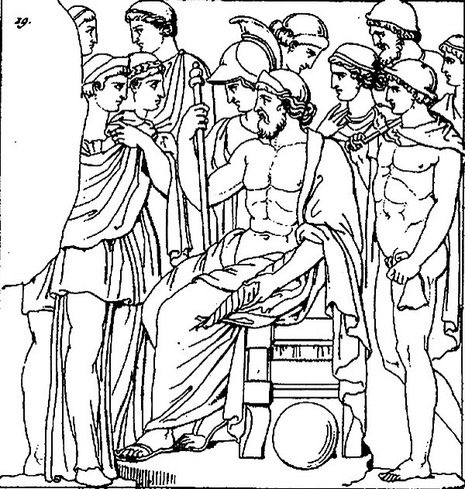 Zeus and the Olympians. Surely they look like aliens and not humans to you. (Wikimedia Commons)
So, we see that some “ancient texts” state that the gods were merely human beings promoted by time and ignorance to the status of gods. On what basis can we discount these texts while privileging other texts that hew closer to the ancient astronaut theory’s views? The answer, of course, is that we cannot. Of course, it is possible to argue that these texts represent a later development, or that they represent later efforts to interpret earlier myths that were in turn influenced by aliens. But this brings us to a paradox.

On one hand we have actual, unambiguous ancient texts that literally state that the gods were not aliens but humans. And on the other hand we have texts that AATs have interpreted as seeming like they depict 1960s-era astronauts. So which do we believe: the ancients’ actual words, or von Däniken’s and Tsoukalos’ reconstructions of what they believe some (but not all) of those words mean?

According to the rules of the ancient astronaut theory, as laid down by von Däniken and Tsoukalos above, we must assume that “ancient texts” are literal and accurate, while discounting the possibility of interpretation or subjective judgment, since according to the AATs, ancient people lacked the imagination or the ability to create fantasy wholesale. As von Däniken wrote in Chariots: “Even imagination needs something to start it off. How can the chronicler give descriptions that presuppose at least some idea of rockets and the knowledge that such a vehicle can ride on a ray and cause a terrifying thunder?”

The reason for this should be obvious: “Ancient texts” are not monolithic, literal records of what happened in the past. They were written by different authors for different purposes in different times and places. Every ancient document has its own unique history, composition, biases, and (for some) even false or fictitious elements. To truly explore ancient literature is to understand these facets of these works and to analyze them according to a methodology established prior to the attempt to use the texts to justify a prefabricated theory.

The AAS-RA ancient astronaut organization describes ancient texts as including:

But isn’t this exactly what the AATs themselves are doing—cherry-picking ancient literature for random paragraphs and incidents that “look like” their childhood fantasies of Apollo-era NASA rockets and spacesuits? As I have just demonstrated, cherry-picking the ancient texts can equally well “prove” that the gods, far from being aliens, simply never existed at all.

Of course, that particular picked cherry also has the benefit of being true.