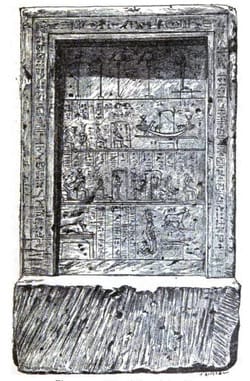 177. The references to the Sphinx, and the so-called temple beside it in the time of Khufu, have made this monument from the first an object of great interest. These references would be of the highest importance if the monument were contemporaneous with Khufu; but the orthographic evidences of its late date are entirely conclusive, and the reference to the temple of a goddess whose cult arose as late as that of Isis, as well as the title of Isis, viz., “mistress of the pyramid,” prove conclusively that the present stela is not a copy of an older document. [1] The fact that the priests of Pesebkhenno’s time regarded the building beside the Sphinx, as the temple of “Osiris of Rosta” (Rʾ-stʾ) is, however, of great interest, but does not determine for us the original character of that structure. [2]

178. [3] He made (it) for his mother, Isis, Divine Mother; Hathor, Mistress of ˹Nun˺. [4] The investigation [5] was placed on a stela. He gave to her an offering anew, and he built her temple of stone again. He found these gods in her place. [6]

179. The inscription in the lowermost section of the sunken panel is also of importance in conjunction with § 180.

​The district of the Sphinx of Harmakhis (Ḥr-m-yʾḫw˙t) is on the south of the house of Isis, Mistress of the Pyramid; on the north of [8] Osiris, Lord of Rosta (Rʾ-stʾ). The writings ˹of the goddess[9] of˺ Harmakhis, were brought, in order to investigate. [10]
— may he grow; may he live forever and ever, ˹looking˺ toward the east.

180. The sunken panel occupying the greater part of the stela contains only reliefs [11] representing the statues of gods, belonging to the temple, and texts giving their names, the materials of which they were made, and their dimensions. The following texts occupy the raised margin and the edge:

[12] Live the Horus: Mezer (Mḏ[r]), King of Upper and Lower Egypt: Khufu, who is given life. He found the house of Isis, Mistress of the Pyramid, [13] beside the house of the Sphinx of [14] [Harmakhis] on the northwest of the house of Osiris, [15] Lord of Rosta (Rʾ-stʾ). He built his pyramid beside the temple of this goddess, and he built a pyramid for the king’s-daughter [16] Henutsen (Ḥnwt-sn) beside this temple. [17]

[2] It is well to recall that in the Empire the true character of the Sphinx had been forgotten or misunderstood. The same might equally well have happened in the case of the building alongside it. [Later: It is now known that the building is a monumental portal, the entrance to the causeway leading up to the second pyramid.]

[5] Text has the three nw signs used in writing Nun.

[6] Of her titles to the land? It is probably this remark which led Maspero to conclude that this stela is a copy of an older document. The word translated “investigation” (sp˙t for s˙yp˙t) occurs also in Dümichen, Bauurkunde des Denderatempels, 16, in the same connection; cf. Brugsch, Hieroglyphisch-demotisches Wörterbuch, 1206, and a better example in Brugsch, Thesaurus, V, 1223, top line (time of Ramses II).

[7] A reference to the statues of the gods enumerated in the sunken panel. The stela is really an inventory of such statues; see § 180.

[10] The connection between this sentence and the preceding is probably that the limits of “The district of the Sphinx” were investigated as found recorded in “the writings (viz., the records) of the goddess.” (It is possibly this statement also which leads Maspero to believe the document is a copy of an older one.) The same word (syp) is used in reference to the investigation of old titles, e. g., in Khnumhotep’s tomb, Benihasan (§ 625, 1. 44.).

[13] This is also her title in the sunken panel.

[14] The genitive n shows that “Harmakhis” as found in the same phrase in the sunken panel, has been omitted.

[15] That this would identify the so-called “temple of the Sphinx” as the temple of “Osiris of Rosta” was early noticed by Mariette (cf. Le Serapeum, p. 99); but the fact seems to have been unnoticed, and does not find mention in any of the archaeologies. The mere statement that the king “found” the Isis temple is unusual; one expects m ws: “in ruins” as so very often, and this is confirmed by the statement of the left side: “He built her temple again.”

[16] According to Herodotus, the middle of the three small pyramids east of the Great Pyramid, belonged to Khufu’s daughter (Herodotus, II, 126). Henutsen is mentioned in a contemporary tomb at Gizeh (Brugsch, Thesaurus, V, 1231).

[17] According to this statement, the little Isis-temple east of the Great Pyramid was standing on the Gizeh plateau before any of the pyramids were built! If Maspero accepts this statement, he should add this Isis-temple to the buildings which he believes were the predecessors of the pyramids on the Gizeh plateau (Maspero, Dawn of Civilisation, 365, n. 2).