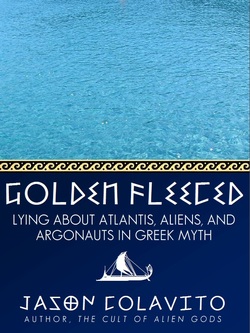 Ancient Greece looms large in the modern imagination as the font of Western civilization. Because Greek accomplishments are so fundamental to the Western world, there has been no shortage of attempts to rewrite the history and mythology of ancient Greece to suit modern ends. This book will examine Robert Freund's recent claim to have discovered Atlantis in Spain and discuss the real evidence needed to prove Atlantis existed outside Plato's imagination. This book will also explore attempts to link Atlantis with creationist and catastrophist theories of history and one scholar's belief that the ancient Greeks had modern robotic technology. Finally, this book will explore the misuse of the Greek myth of Jason and the Argonauts in Robert Temple's theory that amphibious aliens from Sirius invented human civilization. Greek mythology is a source of endless fascination. This brief eBook looks at four ways this fascination went very, very wrong.

This free 30-page eBook is available for download as a full-color, fully-illustrated formatted PDF file, or as an illustrated .mobi file for the Amazon Kindle and smartphones.