FAKING ANCIENT ART IN UZBEKISTAN
Another case of fraud in the ancient astronaut theory.

This article has been updated to include information about Sputnik's correction.

In The Gold of the Gods (1972; English translation 1973), Erich von Däniken makes an astonishing claim about a cave painting in Uzbekistan, a painting he argues is proof that ancient humans drew images of the aliens who came to earth in prehistory, around the time that (fake) stone plates (see below) recorded their coming:

Here is how this image appeared in The Gold of the Gods, where it superficially seems to confirm all of von Däniken's claims. 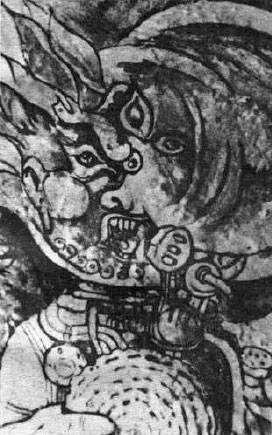 Dr. Saizev's "astronaut" as it appeared in The Gold of the Gods (p. 82).
In the film version of Chariots of the Gods? released in 1970 in West Germany and in 1973 in the United States as In Search of Ancient Astronauts, Dr. Zaisev appears and confirms that this painting was found in Uzbekistan and is quite ancient. According to the English version of the documentary, Soviet scholars "carefully copied" the rock painting. Here is how it appears in the documentary: 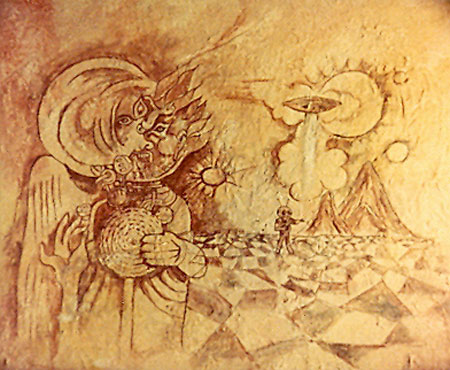 One of several versions of the alleged cave painting. Note that von Däniken cropped and flipped the original image.
It is rather astonishing that ancient cave dwellers from the Stone Age were using sophisticated types of composition, shading, and perspective not invented until the Renaissance in Europe. Perhaps the aliens taught art lessons? But as the British version's narration states:

Funny thing, though: this isn't an ancient cave painting. The illustration was drawn to illustrate a 1967 Sputnik magazine story on the ancient astronaut theory. The above image appears to be a sketch or study for the final, inked version. Here's the relevant page image: 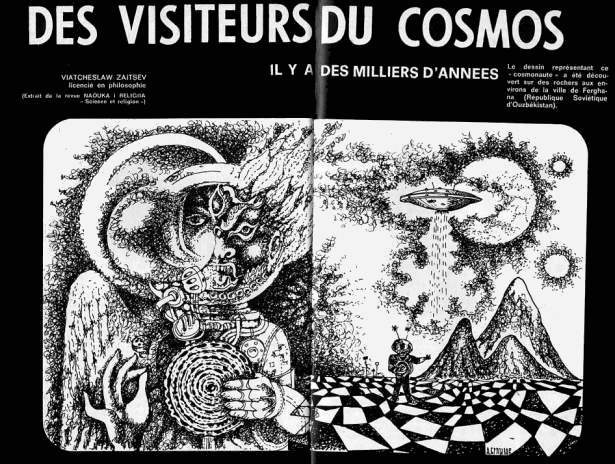 The 1967 Sputnik magazine article. The illustration, signed by the artist, is a finished, inked version of the concept sketch seen in the film.
To be fair, Sputnik claimed the picture was real even though the artist's name appears on the published image, no photo of the alleged original exists, and the two extant versions of the "carefully copied" painting differ in many details large and small. The French text reads: "The drawing representing a 'cosmonaut' was discovered on rocks in the vicinity of the city of Ferghana (Soviet Republic of Uzbekistan)."

However, unbeknownst to later writers, Sputnik issued a correction in the very next issue, as PaleoSETI.de discovered:

This is the actual piece of rock art really found in Uzbekistan, a standard piece of shamanic art: 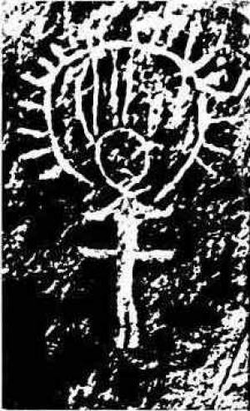 Weirdly enough, von Däniken reproduced the correct image in the German version of Gods from Outer Space (Return to the Stars) (1970), just before Gold of the Gods, though it does not appear in the English edition, suggesting that von Däniken either intentionally included the false image in his later books or was so careless as to not care. The correct image also appears in In Search of Ancient Gods alongside the false image, with both listed as coming from Fergana, again suggesting that von Däniken was at best exceedingly careless.

The incorrect Sputnik picture also appeared in an April 1967 Flying Saucers magazine story, apparently copied from the Sputnik original. In both cases, the disc held by the "alien" is one of the alleged Dropa stones, a a series of large discs covered in hieroglyphs supposedly telling of the crash of a flying saucer and its occupants’ subsequent activities in nearby China. These discs do not exist, but interestingly the author of the Sputnik article, Dr. Zaisev, was also involved in promoting the Dropa stones. He would later confess that the image was not authentic, hardly a major concession given Sputnik's correction.

It's a bit difficult to believe that von Däniken had no doubts about the painting at the time of publication, given that The Gold of the Gods carefully crops the image to hide the most ridiculous and obviously modern parts, and even reverses the image to obscure its origin.

But von Däniken cared nothing for the evidence of its modern origin. Even more brazenly than in The Gold of the Gods, the complete image is reproduced, with photo credit to Constantin Film (the production company behind the Chariots film version), as figure 61 of the follow up book to Gold, In Search of Ancient Astronauts: My Pictorial Evidence for the Impossible (1973; English version 1974)--even many years after von Däniken was alerted that the picture was not ancient. In the 1974 book, von Däniken again claims the painting is absolute proof that ancient people witnessed ancient astronauts.

Sadly, this case of ancient astronaut fraud continues to be repeated down to this very day as fact despite its obviously fraudulent nature.