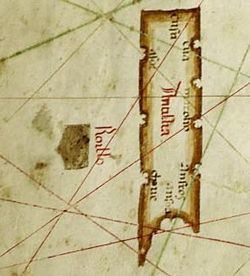 …afterward we had a very good wind, and while sailing we saw many birds flying. Our sailors said that these birds came from the enchanted islands, which were never seen because a bishop of Portugal, with all of those who had wished to follow him, had landed there and that this was in the time of Charlemagne, King of France, before the Saracens had conquered the Spains: Aragon, Granada, Portugal, Galicia, all of which comprise the kingdom of Spain. And after this said bishop had saved himself with all those who wished to follow him, there were many ships which arrived on this island, as was told to me by the Portuguese. And then this said bishop, who was a great clerk, knowing the art of necromancy, enchanted the said islands that they may appear to no person until all the Spains should be restored to our good Catholic faith, but frequently sailors see the birds from the said island in sailing in that quarter without being able to see anything of the said island because of the said enchantment.

Translated by Jason Colavito. The text describes events from 1479-1480 and was composed after 1515 from journals, notes, and memories. It survives in a copy made in 1548.

In the year 734 after the birth of Christ, when all Spain was overrun by the miscreants of Africa, this Island of Antillia, called also the Isle of the Seven Cities, was peopled by the Archbishop of Porto with six other bishops, and certain companions, male and female, who fled from Spain with their cattle and property. In the year 1414 a Spanish ship approached very near this Island.

This island of Antilla was once discovered by the Portuguese, but now when it is sought it cannot be found. In this place may be found a people who speak a Hispanic language and who are believed to have fled from the Barbarians to this island in the time of King Roderic, the last to have ruled Spain in the time of the Goths. Here they have one archbishop with six other bishops, and each of whom has his own particular city, from which it is called the Island of the Seven Cities. The people live in the most Christian way, with all of the riches of this century.

Juventus Fortunatus Relates that there is an account of two Islands towards the West, and more Southward than those of Cabo Verde which swim along upon the water. These and the like grounds might move several People of the Islands of Ferro and la Gornera is also of the Azores, to affirm that they saw Islands towards the West every Year, which they look’d upon as most certain and many Persons of Reputation swore it was true. He says moreover, That in the Year 1484, there came into Portugal one from the Island of Madera to beg a Caraval of the King to go to discover a Country which he saw every Year, and always after the self same manner, agreeing with others, who said they had seen it from the Islands Azores. On which Grounds in the Charts and Maps formerly made, they placed Some Islands thereabouts and particularly because Aristotle in his Book of Wonderful Natural things affirms, it was reported that some Carthagenian Merchants had sailed through the Atlantic Sea, to a most fruitful Island as we shall declare more at large hereafter, which Islands Some Portugeses as inserted in their Maps, calling it Antilla tho' they did not agree in the Situation with Aristotle, yet none placed it above 200 Leagues due west from the Canaries and Azores, which they conclude to be certainly the Island of the seven Cities Peopled by Portugeses at the time that Spain was conquered by the Moors in the year 714. At which time they say seven Bishops with their People Embarked and Sailed to this Island, where each of them built a City, and to the end none of their People might think of returning to Spain they burned the ships, Tackle and all things necessary for sailing. Some Portugeses discoursing about this Island, there were those that affirmed several Portugeses had gone to it, who could not find their way to it again. Particularly in the time of Henry Infant of Portugal, a Portugese Ship was drove by Stress of Weather to this Island, Antilla, where the men went ashore, and were led by the Islanders to their Church, to see whether they were Christians, and observed the Roman Ceremonies, and perceiving they did, they desired them not to depart till their Lord came, who was then absent, would make very much of them, and give them many Presents, and to whom they would presently send advice, but the Master and Seamen, were afraid of being detained, suspecting those People had not a mind to be discovered, and might therefore burn their ship and for that reason they sailed back to Portugal hoping to be rewarded for what they had done by the Infante. He reproved them severely, and bid them return quickly; but the Master for fear ran away from Portugal with the ship and men; and it was reported, that whilst the Seamen were at Church in the Said Island, the Boys of the ship gathered Sand for the Cook-Room, the third part whereof they found to be pure gold. Among others that set out to discover this Island, was one James de Fiene, whose Pilot Peter Vilasquer of the Town of Palos de Moyner, told the Admiral in the Monastery of St. Mary de la Rabida that they set out from Fayal, and sailed above 150 Leagues South-West and on their return discovered the Island Flores, being led to it by abundance of Birds they saw fly that way, because those being Land and not Sea Fowls they judged they could not rest but upon Land; after which they sailed so far North East, that they came to Cape Clare in the West of Ireland, where they met with stiff Westerly Winds, arid yet a smooth Sea, which they imagined was caused by some Land that sheltered it towards the West. But it being then the month of August they would not turn towards the Island, for fear of Winter. This was about 40 years before our Indies were discovered.

Translated in John and Anwsham Churchill’s Collection of Voyages and Travels (1704).

Ancient navigation charts depicted some islands amidst the seas, specially an island called Antilla, which they located nearly two hundred leagues west of the Canary islands and the Azores. This island the Portuguese thought to be the island of the Seven Cities, so famous and craved after that many greedy people has been led into delusion, spending [in the attempt to find it] a lot of money without any profit. Thus dreaming, the Portuguese say that this island of the Seven Cities was populated by fellow countrymen, in the time when Spain was lost, under the reign of King Don Rodrigo; when fleeing from that [Muslim] persecution, seven Portuguese bishops embarked with plenty of people and arrived in the said island of Antilla, where each founded a town. Then, in order to prevent people from turning back they set the boats afire. [The Portuguese also say] that in times of Infante Don Enrique de Portugal, a ship that had sailed from Portugal was caught in a storm and did not stop until reaching that island. People living there took the sailors to the church to find out whether they were Christians and performed the Roman ceremonies; and when they learnt they did, they pleaded them to stay [...] but the sailors were afraid to have their vessels burnt and be retained, so they left for Portugal very happy [...] and never returned to that kingdom once they had left.