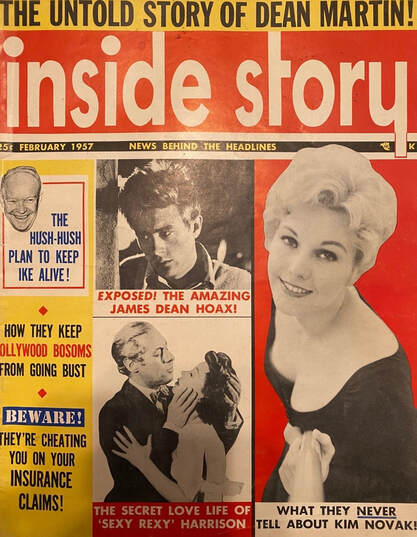 By Lisette Dufy
Cash-Register Rebirth
​Our subject’s name is James Dean. The eerie post-mortem popularity he has achieved has been described by various newspaper oracles as a “spontaneous display of affection on the part of his teen-age fans who just can’t forget him.”

On the anniversary of his death, more than 3000 of his young fans made a pilgrimage from all over the country to place floral wreaths on his grave in Park Cemetery, in the little town of Fairmount, Indiana.

Squads of state troopers had to be summoned to keep order, and there were floral tributes sent from as far away as West Germany. It was an impressive testimony to what one newspaper described as “James Dean’s fantastic posthumous fame.”

The INSIDE STORY, however, is that this outpouring of Dean devotion is about as spontaneous as a Hydrogen bomb test!

James Dean was “reincarnated” deliberately and as a result of careful, long-range planning. The whole crazy “rebirth” program was simply an ingenious device to rake in a fortunate at Giant’s box-offices!

How successful this campaign has been is proven by this significant comment in a Hollywood trade publication:

“The amazing revival of interest in a dead actor has probably added a few million dollars to the world-wide gross of Giant.[”] Unfortunately, Dean, “living” again only for the profits of the movie-makers, will never see a dime of that increased gross.

Thus, the automobile crash which cost Dean his life on September 30, 1955, becomes, by a twist of irony, a piece of economic good luck.

“It could have been a disaster for the studio and all Hollywood,” a top-flight motion picture executive told us. “In fact, for a few weeks after Dean’s death, it looked like it WAS a disaster. Remember, the studio had $5,000,000 invested in Giant and their entire selling program for the movie was based on Dean’s unusual appeal.
The Dead Don’t Draw
​“But how could he maintain this appeal when he was no longer living? It would take nearly a year for Giant to be shown in motion picture theaters. In a year’s time, the notoriously fickle American public would forget the name of James Dean.

“There was still another consideration that had Warners’ brass reaching for their ulcer pills,” continued the executive. “People just don’t like to see a picture which has a dead man for a star. When people are in a dark movie house, they like to identify themselves with the principal characters.

“But when they know the person playing the make-believe role has been dead for months, audiences lose all their illusions and their sense of identification. Jean Harlow’s sudden death cost MGM a fortune. She had three unreleased pictures when she died and when MGM put them out, nobody would go to them.

“Same thing happened when Carole Lombard was killed in that tragic plane crash during the war. The pictures that were shown after her death played to empty houses.

Warner Bros. was resigned to the same fate for James Dean’s Giant. In fact, they had already written off the picture as a loss. But then, a lower-case member of Warner’s Publicity Department had a brainstorm.

Why not “reincarnate” the handsome young actor? It might save millions.

Oddly enough, this publicist now labors in another movie vineyard and has gone unrewarded for his bizarre brainstorm! When the studio’s four high pooh-bahs met for their private session on how to handle the Dean case, one of them picked up a note from the publicist suggesting the “reincarnation” as a solution to this problem.

It was the answer to a movie studio’s prayers!
Campaign Begins
Officially, Warner Bros. announced to the public that any such “reincarnation” campaign would never be promoted by the studio. It would be “unethical,” they piously proclaimed.

But, at the same time, a high-priced, independent public relations expert was secretly hired to plan and promote the program with every gimmick he could dream up.

Warners’ executives decided that if their own studio publicity department were put to work to “revive” Dean, news of what the were doing would leak to columnists and trade reporters. In turn, these columnists would denounce the studio for commercializing a corpse.

On the other hand, with an outside firm calling the shots and handling the strategy, no one would think of connecting Warners’ with the “spontaneous” movement.
“Mark of Respect”
First item on the press agent’s campaign agenda was to fly a host of Dean fan club presidents to Hollywood for a conference on their late “hero.”

The presidents had been at the point of disbanding their clubs. But the press agent—who identified himself only as an organizer of a James Dean Memorial Fund—convinced them to keep going “as a mark of respect for the young man’s talent.”

Since the p.a. was picking up all their Hollywood tabs, and showing them around the town with an open-handed checkbook, the club presidents were only to eager to agree to anything he suggested.

Result: They went home, to their members the clubs “just had to continue,” and made pilgrimages to Dean’s grave. They arranged to hold memorial meetings in his honor and to buy the Jimmy Dean records which an enterprising publisher put out on an experimental basis.
Mourning Worth Millions
The publicity grist mill turned out reams of copy, designed to fire up Dean’s teen-aged admirers to fever-pitch. Memorial services were held at regular intervals all over the country.

And this was just the beginning. Copies of the red jacket James Dean wore in Rebel without a Cause began selling out for $22.95 and became the official uniform of the James Dean fan clubs.

For $30, Dean fans could also buy a three-inch sculptured-in-stone head of the late actor made by such artists as Hollywood’s Ken Kendall. For those with less chips in their jeans, there was a $5 life-size head made out of plastic which had an eerie human feel to it.

The James Dean cult had arrived!

But even this was not enough for the money-hungry movie-makers. It might die out too quickly, before the movie Giant had milked the public of every last bit of sentiment to get them to the box office. So the press agent decided to go one step further.

He planted a number of “teaser” items in Broadway columns—3,000 miles removed from the Hollywood scene. These said, in effect, that “Hollywood is being swept by rumors that Jimmy Dean wasn’t killed in the auto crash, that he is actually alive and hiding out because his face was disfigured.”
Agent Spreads Rumors
The basis of these “rumors” was a slight discrepancy in the reports by the first arrival at the scene of Jimmy’s fateful auto crash. Dean had been at the wheel of his fast Porsche sports car when it collided with a car driven by a young college student.

Dean had had a passenger—an mechanic named Rolf Weuteuch. Weuteuch was wearing a bright red shirt while Dean wore a white one.

Some people at the crash scene told reporters that the driver—the only man killed in the accident—was wearing a red shirt. Both Weutech and the police insisted that these observers just got their colors mixed in the excitement.

But the press agent seized on this minor conflict of opinion to generate the gossip that Dean wasn’t dead, but was merely hiding out because his injuries were so bad.

Also spread far and wide was the statement of the ambulance driver who took Dean to the hospital and insisted the actor was still alive when he left him. The press agent neglected to add that this report was meaningless because the record showed that Dean had passed away a few minutes AFTER arriving at the hospital.
“He’s Alive”
Just in case some of Dean’s teen-age fans missed reading in the columns “that Dean might still be alive,” the press agent included the phoney rumor in the monthly bulletins he had started mailing to all the Dean clubs.

Naturally, he neglected to mention that the columnists he was quoting were using items he himself had planted! The almighty power of suggestion worked quickly. “Jimmy’s still alive,” went the word from bobby-soxer to bobby-soxer. They began flooding his studio with letters written to their “darling Jimmy.”

“Teen-ager today all too often believe what they want to believe,” New York consulting psychologist Jerome Grossman told INSIDE STORY. “Just to give them the tiniest hint that maybe James Dean could be alive was enough to convince great numbers of them that he WAS alive.”

When the mail began arriving, Warners’ press department showed the letters to various Hollywood columnists who immediately reported these letters to be “sincere and genuine.” Every time a columnist printed something about the volume of letters coming in, more impressionable teen-agers wrote more letters.

“My dearest Jimmy,” a 17-year-old Arkansas girl wrote, “I know you’re not dead. If you think you’ve got to hide because your face was smashed up, you’re making a big mistake. It won’t make a bit of difference to your fans—especially not to me.

“If you don’t believe me, come out to my farm and I’ll prove it to you in any way you’d like. There’s a room above the barn where you could hide out and even my folks won’t have to know you’re here.”
Thousands of Letters
Another fan wrote offering “lover Jimmy” the skin from her most tender spots so he could have plastic surgery done on his mangled face.

Magazine editors, startled by the display of interest in Dean and assuming it was completely “spontaneous”—there’s that magic word again—ordered their writers to turn out Jimmy Dean stories by the bale.

Smart publishers sized up what was going on and fed the teen-age appetite by bringing out special books entitled Jimmy Dean Returns, I Talked with Jimmy Dean, etc.

Members of the Dean cult bought these books by the thousands, never stopped to think that these books might be phonies, that they’d been turned out purely for the purpose of capitalizing on a craze. They bitterly resented any suggestion that it was neurotic to believe a dead man wasn’t dead.
They’d Rather Have Jimmy
When a press agent for Universal Studios brought Piper Laurie to a teen-age gathering in a Philadelphia social hall, some of the teeners remarked:

“It was nice of you to bring Piper, but we’d much rather you brought Jimmy Dean.”

“How could I bring Jimmy Dean? He’s dead.”

“He’s not, he’s not,” the girls screamed. Then they began to insult the agent and threatened him until he left the building.

“Their fanaticism frightened the heck out of me,” he told INSIDE STORY. “I still get goose-pimples all over thinking about it.”
Talking with His Ghost
As an added extra fillip, the publicity man who started the whole “revival” craze got a few mystics to hold Jimmy Dean seances at regular intervals.

By the time they were finished communicating with the “deceased,” even some normally hard-boiled adults were selling themselves on the idea that maybe this young actor’s ghost had found a way to walk again.

The campaign was a huge success. Giant opened with the name of James Dean on everybody’s lips. The picture couldn’t miss, since the public’s normal phobia against going to pictures featuring a deceased star didn’t apply—why should it when all red-blooded Dean fans just KNOW their boy hasn’t gotten himself killed?

All this proves, we suppose, that you can still make good hard money out of a will-o’-the-wisp—and that there’s nothing sacred in Hollywood, not even the right of the dead to lie in peace.