Alternative authors generate an air of mystery around the
"Navel of the World" in order to support their theories,
but how mysterious is the history of Easter Island? 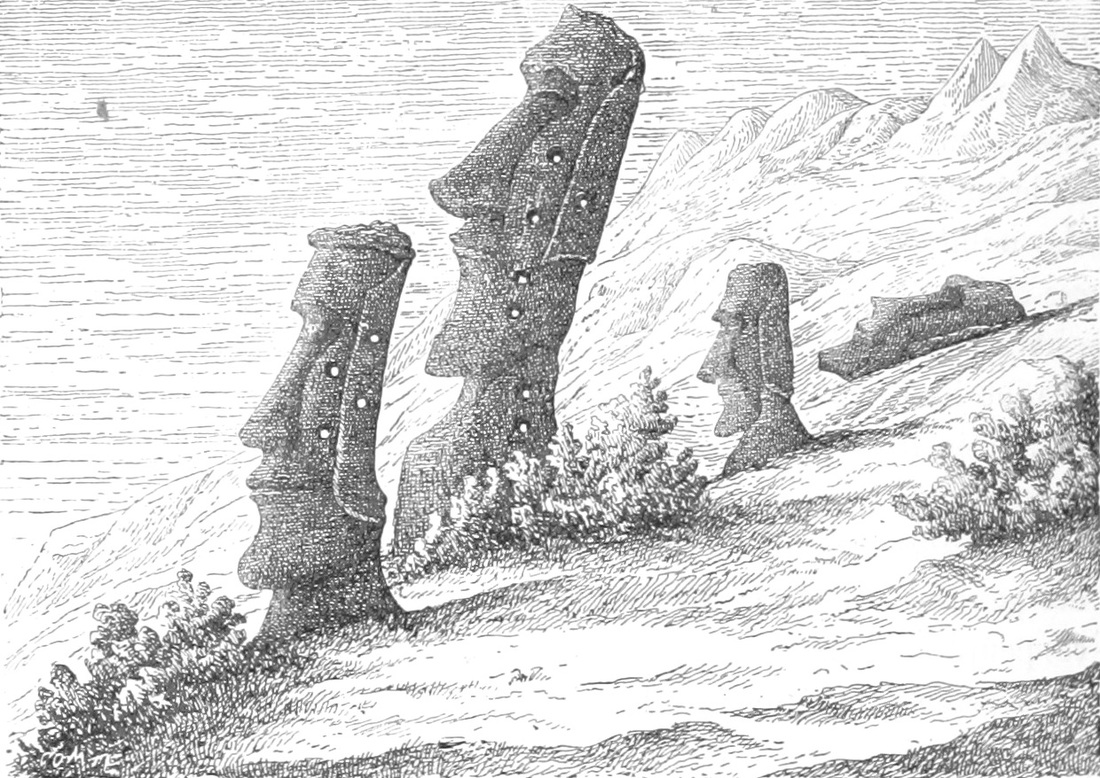 On a dusty speck of rock in the middle of the Pacific Ocean, one of the most celebrated cultures in history found a foot-hold into the popular imagination. The inhabitants of Easter Island created a cultural legacy that continues to resonate today as tourists flock to the tiny Chilean possession to see for themselves the impressive and distinctive statues, called Moai, which dot the landscape and stare with empty eyes toward the endless ocean. They stand on platform temples, called Ahu, which the islanders built up and enlarged over the course of centuries. Tourists are astounded by the fine craftsmanship and breath-taking beauty of Easter Island. Many believe a great mystery lies hidden there.

Decades ago, anthropologist Robert Suggs wrote a history of Polynesia that was a standard text on the subject. He firmly believed that archaeology had solved most of the island's puzzles: "The mystery of this island, then, is largely of an artificial nature, created for specific purposes by nonscientific authors." He implied that those authors seek only fame and fortune, not truth. For that reason, they obscure the history of the famous Moai.
Dr. Robert Suggs developed the current theory that Polynesia was settled by Asian immigrants. He gave an eloquent rebuttal to Heyerdahl's opus Aku Aku in his Island Civilizations of Polynesia (1960). Heyerdahl seems to have blazed the trail Zecharia Sitchin would later follow, since both men claimed they alone leanred the secrets of the ancients. Suggs sarcastically comments: "The Easter Islanders, of course, regurgitated the sum total of their esoterica for this impressive visitor, and he was shown all manner of secrets heretofore hidden from the eyes of white men," including never-before-seen sculptures Heyerdahl claimed depicted "aku-aku," or demons. Suggs adds that they actually "are the crudest of frauds."

Nine years later, von Dänkien would use these concerns about Heyerdahl's Aku Aku to argue that Easter Island did not develop alone, without addressing the central criticism:

"Connections between Easter Island and Tiahuanaco automatically force themselves upon us. There, as here, we find stone giants belonging to the same style," he said in Chariots. "It is more than 3,125 miles from Tiahuanaco to Easter Island. How can one culture possibly have inspired the other?"

Of course, the mystery was quickly solved for ancient astronaut authors. They said Viracocha was the leader of an alien group who inspired both cultures: "I also suspect that the same masters gave lessons on Easter Island, at Tiahuanaco, above Sacsayhuaman, in the Bay of Pisco and elsewhere," von Däniken said in Gods from Outer Space.

But since critics like Suggs had argued that the "Kon Tiki theory is about as plausible as the tales of Atlantis [or] Mu," the leading proponent of the lost civilization hypothesis, Graham Hancock, was able to argue Atlantis-style influence up to the present day:

"We wonder also whether the very real similarities that have been noted linking Easter Island, Tiahuanaco in South America, and various anomalous megalithic structures in the Pacific, might have as much to do with such an ancient and indirect, third-party influence -- touching all these cultures -- as with the direct contacts that did also undoubtedly occur between them," he wrote in 1998.
When Heyerdahl moved a Moai with the aid of wooden rollers, von Dänkien harped on an old idea in Gods from Outer Space: "Nevertheless, archaeologists all over the world protested against this example. . . [T]hey claimed that no finds had yet supplied proof that the islanders ever had wood at their disposal as building material (for rollers)."

Von Dänkien assured his Chariots readers two years earlier, "No trees grow on the island, which is a tiny speck of volcanic stone." That is true today, but was it always?

The UnMuseum website perhaps sums it up best: "When the first Polynesians landed on Easter Island, around 400 to 700 A.D., what they found was far from a barren land. The island was a sub-tropical paradise. Thick forests of palm trees covered the hills." Years of careful archaeological exploration and pollen analysis confirmed that trees existed in abundance early on.

In fact, the islanders only began to build in stone when they had begun to wear down the island's tree resources, according to anthropologist Jared Diamond. In a 1995 Discover magazine article, he said that they used the last of the trees to move the Moai into place in a last-ditch attempt to appease their gods and restore the prosperity their environmental degredation had caused. By the end, Diamond says "[t]hey also turned to the largest remaining meat source available: humans, whose bones became common in late Easter Island garbage heaps."

So how did Heyerdahl, Hancock and von Dänkien (also spelled von Daeniken) go so wrong?

"Heyerdahl and Von Daeniken both brushed aside overwhelming evidence that the Easter Islanders were typical Polynesians derived from Asia rather than from the Americas and that their culture (including their statues) grew out of Polynesian culture," says Diamond. Hancock merely followed after his predecessors, even though by the time he wrote Heaven's Mirror (1998), Jared Diamond's article was three years old and Robert Sugg's book was turning thirty-eight.

In that book, Hancock argues that Easter Island's artistic perfection is anomalous:

Only one other point remains to be examined, the mysterious Rongorongo script written on wooden tablets that supposedly "proves" that Easter Island is separate from the rest of illiterate Polynesia. Von Dänkien says this writing "is astonishingly like Chinese," and Hancock argues that it is a legacy from a lost civilization because it is a mystery "how and why the script and the tablets ever came into existence at all."

Well, years before either author, Robert Suggs wrote that the Polynesians were descended from Southeast Asians swept from their homes by Chinese invasion, so a similarity to Chinese writing is not anomalous, if true. Also, Suggs wrote that "writing was probably once part of the Polynesian heritage everywhere, although its use was restricted, of course, to the priestly and upper classes for ceremonial purposes only." The reason no writing remains elsewhere is also simple, "Although produced on wood on Easter Island, it was evidently written on highly perishable bark cloth in Tahiti, and on leaves in the Australs."

The complex language of the Polynesians simplified as it spread out across the Pacific, and writing slowly faded away, presumably because it was no longer needed on the small, isolated islands where the Polynesians now lived. On Easter Island, the so-called "Navel of the World," it continued as a hold-over from the distant past, and today no one can read the symbols that once were understood over thousands of miles of ocean.

Today, alternative authors maintain that the Moai of Easter Island are more than just a magnificent cultural accomplishment, that they are in fact remnants of outside intervention. More than forty years ago, anthropologist Robert Suggs note that "the romanticist or adventurer . . . must create an aura of mystery and enigma about the 'Navel of the World' in order to make his theory more attractive, whatever the basic motivation may be."

As long as that remains true, Easter Island will forever remain locked in the unfathomable vaults of mystery no matter how much research is done or how many explanations are put forward, for no one can ever conclusively prove a negative. "Maybe" and "perhaps" will forever remain possibilities, however remote.