The Great Pyramid is largely anonymous, but controversial
hieroglyphs hidden above the King's Chamber say who built
the pyramid. I look at efforts to discredit the glyphs. 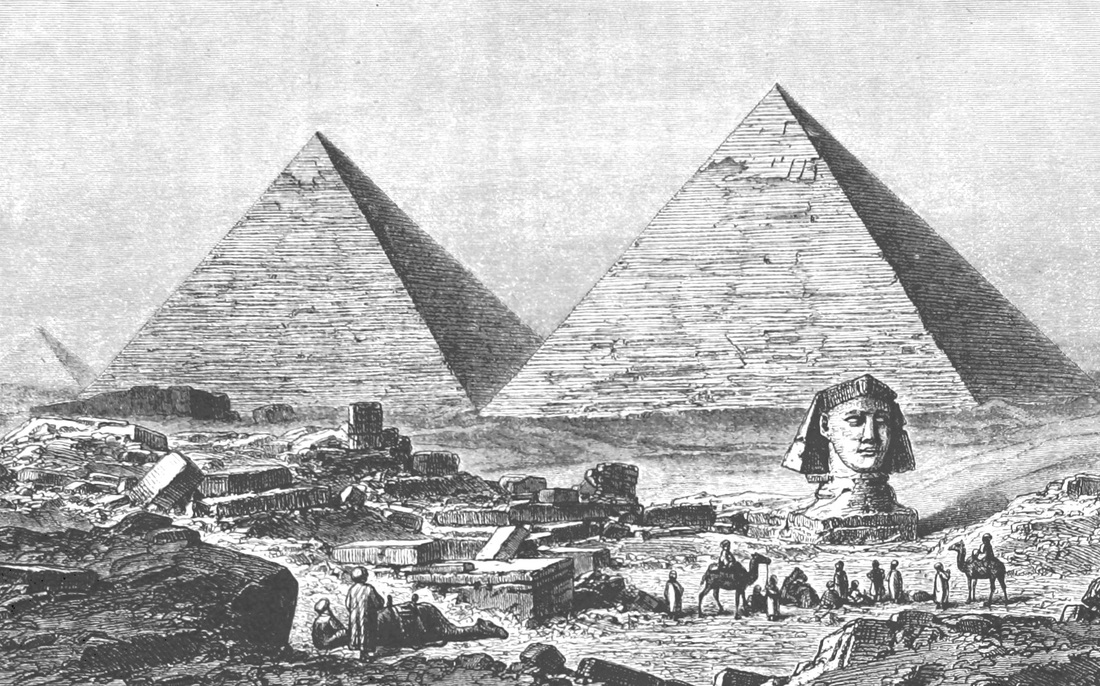 For millennia, the Great Pyramid has stood in mute testimony to the architectural genius of its builders. Within its walls no hieroglyph proclaims the name of the architect and no cartouche celebrates the life of the pharaoh for whom it was built. When the caliph Mamum forced his way in over a thousand years ago, he found no record of who had built the massive structure. Not in the Subterranean Chamber, nor the so-called Queen's Chamber or even in the much-vaunted King's Chamber. Not until 1837 did any marking or identifier turn up within the pyramid's walls, and only then deep inside the secret relieving chambers which keep the pyramid's bulk from crushing the flat roof of the King's Chamber. Many alternative researchers believe that these marks were faked to bolster the traditional identification of Khufu with the Great Pyramid. The first relieving chamber came to light in the 18th century, as Martin Stower says in “Forging the Pharaoh's Name” (no longer online):

"The four remaining compartments were discovered by Colonel Howard Vyse, and his assistants, in 1837; ... they had been sealed since the pyramid was built, and were reached only by tunneling; this was done by hired quarrymen, using gunpowder."

Computer programmer and part-time amateur pyramidologist Tim Hunker gives the conspiracy theory of what happened next:

"'Quarry Marks' exist in the relieving chambers above the King's Chamber, including one mark which is reported to indicate Khufu, the pharaoh under whose reign the Great Pyramid was built. One source suggests that these quarry marks were faked by Howard Vyse in 1837. The reasons give[n] are many, but the main ones are: These marks appear only in the 4 relieving chambers opend by Vyse and not in the original relieving chamber opened by Davison in 1765. Vyse's diary for that day described a thorough examination of the relieving rooms but no mention of the hieroglyphics and quarry marks. The marks were mentioned only the next day, when Vyse returned with witnesses. There are problems with the hieroglyphics in that they are a mixture of styles and syntax/usage from differing time periods of Egypt. And finally, in the marks bearing Khufu's name, mistakes were made. Those same mistakes occur in the only two hieroglyphics references that would have been available to Vyse at that time." (Source no longer online.)

An anonymous Geocities web page (now defunct) takes this theory to heart, saying "The evidence outlined above shows beyond reasonable doubt that Vyse faked the inscription and that Khufu did not build the Great Pyramid." Of course, even if the inscriptions were fake, that alone does not disprove Khufu's ownership. If the "Made in China" sticker fell off a pair of sneakers, that does not mean that they suddenly sprang from Mexico instead.

While Hunker goes on to espouse a firm belief in pyramidology, the belief that the Great Pyramid holds profound meaning in its measurements. But where did he get this strange idea that the quarry marks are fakes? He says only in the text that "one source suggests" this is the case. Turning to the notes at the end of his article, he informs the reader that he gleaned this information from "The Message of the Sphinx, 1996, Graham Hancock and Robert Bauval, ISBN 0-517-70503-6"

Originally titled Keeper of Genesis in its first press run in Britain, Message of the Sphinx represents the first joint book by Fingerprints of the Gods author Graham Hancock and Orion Mystery co-author Robert Bauval. Together, they combined their theorizing about a pre-Ice Age advanced civilization into a unified theory of ancient man. Briefly stated, the two men came to believe that an advanced culture disappeared during the Ice Age, and its survivors gained footholds throughout the world, establishing ancient cultures like the Egyptians, the Maya and the Easter Islanders.

The two authors devoted three pages to questioning the validity of the Vyse find, elaborating on the information summarized above. They then say the Egyptological acceptance of Vyse's quarry marks "verges on intellectual chicanery." They claim that while they raise troubling questions about the Vyse find, they "are frankly puzzled that such questions are never asked." They say, however, that the questions are irrelevant to their larger argument about who owns the pyramids: ""[E]ven if the quarry marks were not forged by Vyse, what do they really prove? Isn't attributing the Great Pyramid to Khufu on the basis of a few lines of graffiti a bit like handing over the keys of the Empire State Building to a man named 'Kilroy' just because his name was found spray-painted on the walls of the lift."

But Hancock and Bauval were not the first to market these theories. Alternative-history believer David Pratt explains where the authors got their ideas about the mason's quarry marks:

"The authenticity of these masons' markings has been challenged by Zecharia Sitchin, who argues that they were forged by Vyse and his assistants in the hope of gaining fame and fortune. He claims that the hieroglyphs are ungrammatical and misspelt (with the sign for 'ra', the supreme god of Egypt, being written instead of 'kh'), that the cursive script in which they were written dates from a later era, and that they were copied (complete with mistakes) from standard contemporary works on hieroglyphics. This argument has been repeated by several other writers, including Graham Hancock (though he has since rejected the forgery theory), Eric von Däniken, and Colin Wilson." (Source no longer online.

Zecharia Sitchin is one of the most famous proponents of the ancient astronaut theory today, second only to the father of the theory, Erich von Däniken, in importance to true believers. Sitchin claims to be the only person who can "correctly" interpret Sumerian writings. While many have disputed his translations and conclusions, Sitchin maintains that the Sumerian writings show that aliens called Annunaki from an exploded planet visited earth and created humanity to mine gold for them.
Stower demolishes Sitchin's theory in clear and simple language: "In 1837, even Samuel Birch [of the British Museum Antiquities Department, where he specialized in Egyptology] couldn't have faked the quarry marks. They have features which even experts didn't understand, but which have become clear since. In fact they fit in perfectly with later discoveries and later analyses."

Stower shows that the hieroglyphs' "misspellings" and errors were actually imperfections in 19th century knowledge of hieroglyphs projected onto the correctly-spelled hieroglyphs themselves.

Nevertheless, the authority of Zecharia Sitchin gave free license to over a dozen alternative authors to cite the "forged" quarry marks as proof that Khufu did not build the pyramid.

For this reason von Däniken could still say in 1996's Eyes of the Sphinx: "[T]he Great Pyramid is a huge, largely anonymous work... There is not a single inscription that would indicate how it was [built]. No one left behind even the briefest note to answer any of our questions regarding its construction. The pyramid itself features no hieroglyphics at all [emphasis added]."

While von Däniken sticks to the forgery line, Graham Hancock changed his mind in the light of "new" evidence known to Egyptology since the 19th century. Says Hancock:

"Cracks in some of the joints reveal hieroglyphs set far back into the masonry. No 'forger' could possibly have reached in there after the blocks had been set in place - blocks, I should add, that weigh tens of tons each and that are immovably interlinked with one another. The only reasonable conclusion is the one which orthodox Egyptologists have already long held - namely that the hieroglyphs are genuine Old Kingdom graffiti and that they were daubed on the blocks before construction began."

Hancock wrote those words in 1998, just months before the launch of his high-profile television series Quest for the Lost Civilization and his book Heaven's Mirror. Hancock seemed to be seeking credibility as a serious researcher at the time, and he revised his beliefs accordingly: "Although I was still open to the erroneous forgery theory while Keeper/Message was being written, I was also very much open to the orthodox theory that the Giza pyramids were Fourth Dynasty work - irrespective of the provenance of the quarry marks."

This statement of 1998 does not seem to square with Hancock's 1996 claim that accepting quarry marks "verges on intellectual chicanery." To this reporter, that statement did not sound like someone who was "open to the orthodox theory."

Hancock sets the record straight about his beliefs about the Pyramid: "For the record I believe that Khufu did build the Great Pyramid - or anyway most of it (perhaps the subterranean chamber and some other rock-hewn parts of the structure may be earlier)."

As Ian Lawton says, "Bearing in mind that it was this original attack by Sitchin which prompted so many other 'alternative Egyptologists' to repeat his accusations without question - although fortunately now most of them have seen the light - this saga perhaps more than any other tells us a very great deal about Sitchin and his work."