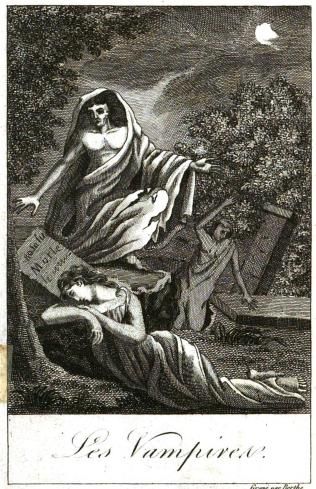 Frontispiece to Histoire des vampires (1820)
What! is it in our eighteenth century that vampires exist? Is it after the reigns of Locke, Shaftesbury, Trenchard, and Collins? Is it under those of d’Alembert, Diderot, St. Lambert, and Duclos that we believe in vampires, and that the reverend father Dom Calmet, Benedictine priest of the congregation of St. Vannes, and St. Hidulphe, abbé of Senon—an abbey of a hundred thousand livres a year, in the neighborhood of two other abbeys of the same revenue—has printed and reprinted the history of vampires, with the approbation of the Sorbonne, signed Marcilli?

These vampires were corpses, who went out of their graves at night to suck the blood of the living, either at their throats or stomachs, after which they returned to their cemeteries. The persons so sucked waned, grew pale, and fell into consumption; while the sucking corpses grew fat, got rosy, and enjoyed an excellent appetite. It was in Poland, Hungary, Silesia, Moravia, Austria, and Lorraine, that the dead made this good cheer. We never heard a word of vampires in London, nor even at Paris. I confess that in both these cities there were stock-jobbers, brokers, and men of business, who sucked the blood of the people in broad daylight; but they were not dead, though corrupted. These true suckers lived not in cemeteries, but in very agreeable palaces.

Who would believe that we derive the idea of vampires from Greece? Not from the Greece of Alexander, Aristotle, Plato, Epicurus, and Demosthenes; but from Christian Greece, unfortunately schismatic. For a long time Christians of the Greek rite have imagined that the bodies of Christians of the Latin church, buried in Greece, do not decay, because they are excommunicated. This is precisely the contrary to that of us Christians of the Latin church, who believe that corpses which do not corrupt are marked with the seal of eternal beatitude. So much so, indeed, that when we have paid a hundred thousand crowns to Rome, to give them a saint’s brevet, we adore them with the worship of “dulia.”

The Greeks are persuaded that these dead are sorcerers; they call them “broucolacas,” or “vroucolacas,” according as they pronounce the second letter of the alphabet. The Greek corpses go into houses to suck the blood of little children, to eat the supper of the fathers and mothers, drink their wine, and break all the furniture. They can only be put to rights by burning them when they are caught. But the precaution must be taken of not putting them into the fire until after their hearts are torn out, which must be burned separately. The celebrated Tournefort, sent into the Levant by Louis XIV., as well as so many other virtuosi, was witness of all the acts attributed to one of these “broucolacas,” and to this ceremony.

After slander, nothing is communicated more promptly than superstition, fanaticism, sorcery, and tales of those raised from the dead. There were “broucolacas” in Wallachia, Moldavia, and some among the Polanders, who are of the Romish church. This superstition being absent, they acquired it, and it went through all the east of Germany. Nothing was spoken of but vampires, from 1730 to 1735; they were laid in wait for, their hearts torn out and burned. They resembled the ancient martyrs—the more they were burned, the more they abounded.

Finally, Calmet became their historian, and treated vampires as he treated the Old and New Testaments, by relating faithfully all that has been said before him.

The most curious things, in my opinion, were the verbal suits juridically conducted, concerning the dead who went from their tombs to suck the little boys and girls of their neighborhood. Calmet relates that in Hungary two officers, delegated by the emperor Charles VI., assisted by the bailiff of the place and an executioner, held an inquest on a vampire, who had been dead six weeks, and who had sucked all the neighborhood. They found him in his coffin, fresh and jolly, with his eyes open, and asking for food. The bailiff passed his sentence; the executioner tore out the vampire’s heart, and burned it, after which he feasted no more.

Who, after this, dares to doubt of the resuscitated dead, with which our ancient legends are filled, and of all the miracles related by Bollandus, and the sincere and revered Dom Ruinart? You will find stories of vampires in the “Jewish Letters” of d’Argens, whom the Jesuit authors of the “Journal of Trévoux” have accused of believing nothing. It should be observed how they triumph in the history of the vampire of Hungary; how they thanked God and the Virgin for having at last converted this poor d’Argens, the chamberlain of a king who did not believe in vampires. “Behold,” said they, “this famous unbeliever, who dared to throw doubts on the appearance of the angel to the Holy Virgin; on the star which conducted the magi; on the cure of the possessed; on the immersion of two thousand swine in a lake; on an eclipse of the sun at the full moon; on the resurrection of the dead who walked in Jerusalem—his heart is softened, his mind is enlightened; he believes in vampires.”

There no longer remained any question, but to examine whether all these dead were raised by their own virtue, by the power of God, or by that of the devil. Several great theologians of Lorraine, of Moravia, and Hungary, displayed their opinions and their science. They related all that St. Augustine, St. Ambrose, and so many other saints, had most unintelligibly said on the living and the dead. They related all the miracles of St. Stephen, which are found in the seventh book of the works of St. Augustine. This is one of the most curious of them: In the city of Aubzal in Africa, a young man was crushed to death by the ruins of a wall; the widow immediately invoked St. Stephen, to whom she was very much devoted. St. Stephen raised him. He was asked what he had seen in the other world. “Sirs,” said he, “when my soul quitted my body, it met an infinity of souls, who asked it more questions about this world than you do of the other. I went I know not whither, when I met St. Stephen, who said to me, ‘Give back that which thou hast received.’ I answered, ‘What should I give back? you have given me nothing.’ He repeated three times, ‘Give back that which thou hast received.’ Then I comprehended that he spoke of the credo; I repeated my credo to him, and suddenly he raised me.” Above all, they quoted the stories related by Sulpicius Severus, in the life of St. Martin. They proved that St. Martin, with some others, raised up a condemned soul.

But all these stories, however true they might be, had nothing in common with the vampires who rose to suck the blood of their neighbors, and afterwards replaced themselves in their coffins. They looked if they could not find in the Old Testament, or in the mythology, some vampire whom they could quote as an example; but they found none. It was proved, however, that the dead drank and ate, since in so many ancient nations food was placed on their tombs.

The difficulty was to know whether it was the soul or the body of the dead which ate. It was decided that it was both. Delicate and unsubstantial things, as sweetmeats, whipped cream, and melting fruits, were for the soul, and roast beef and the like were for the body.

The kings of Persia were, said they, the first who caused themselves to be served with viands after their death. Almost all the kings of the present day imitate them; but they are the monks who eat their dinner and supper, and drink their wine. Thus, properly speaking, kings are not vampires; the true vampires are the monks, who eat at the expense of both kings and people.

It is very true that St. Stanislaus, who had bought a considerable estate from a Polish gentleman, and not paid him for it, being brought before King Boleslaus by his heirs, raised up the gentleman; but this was solely to get quittance. It is not said that he gave a single glass of wine to the seller, who returned to the other world without having eaten or drunk. They afterwards treated of the grand question, whether a vampire could be absolved who died excommunicated, which comes more to the point.

I am not profound enough in theology to give my opinion on this subject; but I would willingly be for absolution, because in all doubtful affairs we should take the mildest part. “Odia restringenda, favores ampliandi.”