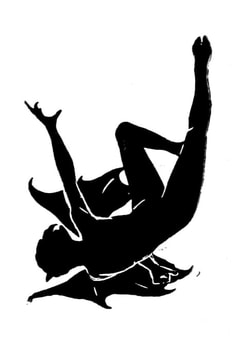 The Egregori: [or fallen Angels]

Out of Syncellus Chronograph, Cap. 11.
​I. AND it came to pass when the Children of Men were multiplied, beautiful Daughters were born to them: and the Egregori coveted them, and went astray after them: and said, one to the other, Let us choose of our selves wives from the Daughters of Men which are on the Earth. And Semiazas, their Archon, [or President] said unto them, I am fearful that you will not do this thing, and I alone shall be guilty of this great Sin. And they answered him, and said, Let every one of us swear with an oath; and let us bind one another under a curse, that we will not alter this our purpose, until we have performed it. Then they all swore together, and bound one another under a curse. Now they were two hundred that descended, in the days of Jared, upon the top of the Mountain of Heronim. And they called the mountain Hermon, from the oath they had taken, and the curse they had bound one another withal upon it. These are the names of their Archontes; (1.) Semiazas, their President. (2.) Atarcuph. (3.) Arakiel. (4.) Chobabiel. (5.) Orammane. (6.) Ramiel. (7.) Sampsich. (8.) Zakiel. (9.) Balkiel. (10.) Azalzel. [Azael.] (11.) Pharmaros. (12.) Amariel. (13.) Anagemas. (14.) Thausael. (15.) Samiel. (16.) Sarinas. (17.) Eumiel. (18.) Tyriel. (19.) Jumiel. (20.) Sariel.

II. These and all the rest, in the 1170th year of the world, took to themselves wives, and began to defile themselves with them, until the Flood: and they bear to them three sorts, [as their posterity.] The first were the great Giants. Now the Giants begat the Naphilim, and the Eliudim were born to the Naphilim. And they increased in their bulk, and they taught one another, and one anothers wives, witchcrafts and charms. Azael was the first, but the tenth of the Archontes; and the taught men to make swords, and breast-plates, and all sorts of armour, and metals, out of the Earth; and how they might work in gold, and silver, and make them ornaments for their wives. He taught them also to burnish, and to paint their Faces, and the use of precious stones, and of washes. And the Sons of Men made these things for themselves, and for their Daughters. And they transgressed, and made the Saints to go astray. And their was great Impiety upon the Earth: and they perverted their ways. Moreover, their chief Archon Semiazas taught them to have a spite against the mind, [or remedies efficacious against diseases,] and the roots of herbs that were in the Earth. But Pharmaros, the eleventh, taught witchcrafts, charms, cunning arts, and the dissolution of charms. The ninth taught them Astroscopy; the fourth taught Astrology; and the eighth taught Aeroscopy; and the third taught the Signs of the Earth; and the seventh taught the Signs of the Son; and the twentieth taught the Signs of the Moon. All these began to reveal these Mysteries to their Wives and to their Children.

III. Now, afterwards, the Giants began to devour the Flesh of Men, and mankind began to be diminished upon the Earth. And the remainder cried unto Heaven, on account of their affliction, desiring that their Memorial might be carried up before the Lord. . . . . .

IV. And when the four great Archangels, Michael, and Uriel, and Raphael, and Gabriel heard thereof, they looked down out of the holy places of Heaven, and saw a great deal of blood shed upon the Earth, and all kind of impiety and wickedness practised; They came in [again] and said to one another, that the Spirits and Souls of Men groan, and intercede, and say, Introduce our prayer before the Most High, and our woful estate before the glory of the [Divine] Majesty, before Him who in greatness is Lord of all Lords. And the four Archangels came near, and said to the Lord of the world, Thou art the God of Gods, and the Lord of Lords, and the King of Kings, and the God of mankind; and the Throne of thy glory is through all the generations of eternity: and thy name is Holy, and Blessed for ever and ever. For thou art He who hast made all things, and hast the power over all things; and all things are manifest and open before thee, and thou seest all things, and there is nothing that can be hid from thee. Thou seest What Azael has done, and what he has introduc’d, and what he has taught; there is nothing but injustice and wickedness upon the Earth, and all kind of deceit upon the dry Land. For he has taught the mysteries, and has revealed to the world the things of Heaven. They follow his Counsels. The Sons of Men aim to know the Mysteries. Thou hast given power to Semiazas to have the Assistance of those that are with him: they have gone after the Daughters of Men on the Earth, and have lain with them, and are defiled with females; and they have discovered to them all their sinful practices, and have taught them to do things abominable. And now, behold, the Daughters of Men have born children to them, even the Giants. Perverse things are diffused over the Earth; and the whole Earth is full of injustice. And now, behold, the Spirits of the Souls of Men that are dead intercede; and their groaning is come up to the gates of Heaven: nor can they depart, because of the acts of violence that are committed upon the Earth. And thou knowest these things before they are done, and seest these [Egregori,] and sayest nothing; What is to be done in this Matter?

V. Then the Most High said; and He that is Holy, He that is Great, spake; and sent Uriel to the Son of Lamech, saying, Go thou to Noe, and say unto him, in my Name, Hide thy self: and declare to him the End that is coming: for the Earth shall intirely perish: and say to him, that there shall come a Deluge upon all the Earth, to destroy every thing from the face of the Earth. Teach that just one, the Son of Lamech, What he shall do, and thereby preserve his Soul in Life, and shall escape for ever; and a stock shall arise from him, and shall be established for all generations, to the end of the world.

VI. And he said to Raphael, Go, Raphael, and bind Azael; tie him hands and feet, and cast him into the darkness, and open the desert that is in the desert of Dudael, and go and cast him thither, and lay under him sharp and rugged Stones, and cover him with darkness, and let him dwell there for ever, and obstruct: his sight, and let him not see light; And at the day of Judgment he shall be led away to the burning fire. And heal the Earth, which the Egregori have destroyed, and discover the method of healing that plague, that they may cure that plague; and that all the Sons of Men may not perish by the mystery which the Egregori have discovered, and have taught it their Sons; and all the Earth is laid waste by the works of the doctrine of Azael: and to it do thou ascribe all the Sins [they have committed.]

VII; And He said unto Gabriel, Go, Gabriel, to the Giants, that spurious breed, to the Sons of fornication, and destroy the Sons of the Egregori, from the sons Of Men. Send them to fight one against another, by war and destruction; and they shall not have length of days; and their Fathers shall have no [room for] intercession for them, tho’ they promise them an eternity of life, and the sight of the light until 500 years.

VIII. And He said unto Michael, Go, Michael, bind Semiazas, and those others with him, that have mixed themselves with the Daughters of Men, so as to be defiled with them, in their impurity. And When their Sons are slain, and they have seen the perdition of their beloved, bind them for 70 generations, in the recesses of the Earth, until the day of their judgment, until the day of the completion of their end, until the judgment of eternity be fulfilled. Then shall they be led away into the Chaos of Fire, and into torment, and into the prison of their eternal restraint. And whosoever shall be condemned, and destroyed from this time with them, shall be bound, until the completion of their generation. . . .

IX. And now, as to the Giants, which were begotten of Spirits and Flesh, they shall call them Evil Spirits upon the Earth; because their habitation is upon the Earth. Spirits that are gone out of the body of their flesh, because they were deriv’d from Men, and from the Egregori; whence was the beginning of their Creation, and the beginning of their foundation; they will be Evil Spirits upon the Earth, the first Spirits of the Giants, that will be voracious, and unjust, and destructive, will fall upon men, and struggle with them, and throw them upon the ground, and make incursions upon them, and will eat nothing, but continue without food, and cause spectres, thirsting, and rushing upon Men. And the Spirits shall arise against the Sons of Men and of Women, because they went out of them. It will also come to pass, that from the day of the time of the slaughter, and destruction, and death of the Giants, that the Naphilim, and the Strong of the Earth, [the Eliudim] those great Men of renown, the Spirits that proceed out of their Soul, as out of the flesh, shall be destroyers without distinction; they shall destroy thus until the day of their consummation, until the great Judgment, when the Great Age shall be finished, shall be all at once finished. . . .

X. But as to the Mountain on which they swore, and bound one another under a curse, there shall never depart from it Cold, and Snow, and Frost; and Dew shall never descend upon it, unless it descend upon it for a curse, until the day of the great Judgment. At that time it shall be burnt up, and laid low, and it shall be burning and melting away, as wax by the fire; so shall it be burnt up, and all its fruits shall wither away. And now I say unto you, ye Sons of Men, that there is great wrath against your Sons, and this wrath shall not cease from you, until the time of the slaughter of your Sons ; and your beloved shall perish, and those you honour shall die from off the whole Earth. For all the days of their life, from this time, shall not be more than 120 Years. And do not you think that you shall still live more years; for from this time they shall have no way of escaping, because of the wrath which is kindled against you in the King of all Ages. Do not you imagine, that you shall escape these Judgments. . . . [‘These things, says Syncellus, are taken out of the first Book of Enoch, concerning the Egregori’.]