ANCESTOR:
A Review and Interview with Scott Sigler 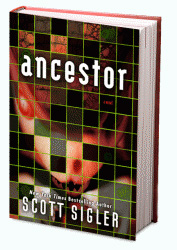 I. Review of Ancestor

Scott Sigler writes books with an eclectic mix of elements drawn from science fiction, horror, and thrillers with a heavy emphasis on real life science. Skeptics can take heart in knowing this science is (within reason) true to life, and without the supernatural and metaphysical aspects that color so much genre fiction. Sometimes this alchemy produces exciting results, like Sigler’s well-received Infected, and sometimes, like the medieval hunt for the philosopher’s stone, the outcome is just a little bit short of expected. Sigler’s current release, Ancestor, is something akin to the results of an alchemical experiment—interesting, but not exactly what was intended.

Ancestor begins as the story of a genetic research laboratory clandestinely attempting to perfect the transplant of organs from genetically modified animals into humans. They call the artificial creatures they make by sequencing DNA “ancestors” because their genetic code is based on their best guess about the DNA of the earliest mammalian ancestors. These creatures can be manipulated to avoid crippling immune responses in the humans into whom their organs will be transplanted. After a series of setbacks, the team ends up on a remote island in Lake Superior where the ancestors are born, but turn out to be something a bit different than the placid herbivores the company had expected.

Sigler’s use of science in the story is clever, and much of the novel recalls Michael Crichton’s many books on the same theme, including Jurassic Park, The Lost World, and Next. Unfortunately, the comparison is sometimes too apt, and while the novel’s set pieces about genetic science and rampaging monsters are quite good (the first appearance of the creatures is especially terrifying), they are also very similar to scenes in Crichton’s novels without contributing anything new to a very familiar story.

Ancestor also suffers from having far too little of the title creatures, who don’t show up until about two-thirds of the way through the book, and don’t really start rampaging in earnest until the final pages. By this point, the novel’s real plot has already been revealed: It’s actually a thriller about a psychopath trying to kill off the island’s residents to cover up the lab’s illegal genetic research. This plot strand is not as strong as the part devoted to the monsters, and at times the novel’s rapid-fire pacing works against the story, leaving too little time to fully develop the book’s characters.

Overall, Ancestor is a fast-paced read that uses real-life science facts to weave an interesting web of science fiction-infused horror. Though Crown is releasing Ancestor with a copyright of 2010, a version of the book was first published by a smaller firm in 2007 and had been a podcast before that. It is one of the author’s earlier works, and the rawness shows. The novel’s rough but serviceable language (not for the easily offended) and fast pacing must have worked especially well in audio form in weekly installments, rather than consumed all at once from cover to cover. Still, skeptics can enjoy the fact that there is at least one horror/thriller author who takes his science as seriously as he does his storytelling.


II. An Interview with the Author

Jason Colavito: You’ve described yourself as a skeptic and have appeared on the Skepticality podcast. What got you interested in skepticism? How is this reflected in your work?

Scott Sigler: Quite frankly, Skepticality was what got me interested in Skepticism. I had just discovered podcasting and was researching the top podcasts. Skepticality was one, so I started listening to explore what went into a podcast that could hold a large audience. The content largely blindsided me—I hadn’t even known skepticism existed in a larger sense. Finding a whole community of like-minded people felt like coming home. Finding an unexpected world of rationality made me more confident to use these traits in the characters I create.

JC: The promotional materials for your books call your style a “trademark blend of thrills and cutting edge science.” How do you employ real life science in your novels?

SS: My primary goal is telling captivating stories. I find that science roots the story in a rule-set that many people already know. By using actual science, the story feels more real, more possible, and creates situations where the reader may think, “I know this is fiction, but the way it is laid out, I can see it really happening.” This makes my creations plausible, which lets the readers give themselves permission to dive further into the illusion.

JC: How does your work differ from traditional science fiction in its application of science?

SS: The majority of what’s sold as science fiction is actually fantasy, where the “magic” is explained away as some future technology that we modern-day people couldn’t possibly understand. While I use that same technique when necessary for purposes of telling a great story, I strive to use real science as much as possible. Three other things set me apart from most science fiction, namely setting, biology and “peer review.” I put my stories in modern-day settings. Most science fiction deals with the near future, the far future, or the ever-popular “dystopian future.” I also focus on real biology and achievable bio-hacking for the story’s “big idea,” where many scifi stories focus on physics, sociology, or “exploring the human condition.” The final difference is I subject my stories to what I call “peer review,” which is giving the full manuscript to three biology-related Ph.D.s who make sure everything reflects accurate science, or is at the very least plausible based on what we know. Submitting the manuscript to them creates enormous amounts of re-writing, and often wipes out large swaths of my planned plot. However, in the end the extra effort is worth it. When people who actually do science for a living email me and say “thank you for doing your homework, I loved it,” that makes it all worthwhile.

JC: Ancestor is about xenotransplantation. How much of the science in the novel has already occurred? How likely is it that someone will attempt what your characters try?

SS: Most of the xenotransplantation listed in Ancestor has already happened. We’ve been using the hearts of primates since 1964.The digitization and reverse-sequencing of the mammalian genome was done by David Haussler at the University of California Santa Cruz. Oligo machines and protein synthesis are real, and conceptually allow one to create a full, computer-engineered genome. Craig Venter has created an artificial bacterium—an actual living organism created from scratch. AgResearch in New Zealand is actively inserting human genes into sheep to see if the animals will produce human proteins in their milk. Imutran (a division of Novartis) has invested heavily in research to put human proteins into pig genomes, trying to create permanent replacement organs. Every last element in Ancestor is real, is happening right now—for the purposes of telling a kick-ass story, I just take all of this real science and bump it up a couple of notches. Although no one is going to try the combination of technologies that are listed in Ancestor, gene modification and cloning are already here, and xenotransplantation is a multi-billion-dollar market if companies can overcome the immune reaction response.

JC: The plot of Ancestor recalls the overreaching genetic scientists in Michael Crichton’s Jurassic Park and Next. To what extent were stories like these an inspiration for your own? What sets your novel apart?

SS: I’ve never read Next, but Jurassic Park is a classic biological scifi thriller that takes established scientific concepts and extrapolates them to make a fascinating and fun fiction story. That novel, along with Relic, by Douglas Preston and Lincoln Child, really helped shape my subject matter. I’ve always been mesmerized by biology and by the storytelling of Stephen King, so the word of Crichton, Preston and Child showed me that I could combine the two.

JC: Many skeptics have a negative opinion of horror, a genre associated with the supernatural. Why do you think a skeptic would enjoy Ancestor?

SS: You are right that most horror stories involve the supernatural, which is why many skeptics brush off the genre. When you seek a world of rationality, random shapeshifting, unexplained undead and a general total whitewashing of the laws of nature and physics just smack of woo-woo and lazy storytelling. My work, on the other hand, is firmly rooted in actual science and doesn’t use woo-woo cop-outs or insult anyone’s intelligence. Ancestor is fiction, a thriller, but the real-world setting makes it a very acceptable form of escapism for skeptics.

This review and interview first appeared in Skeptic 16.1 (2010) and eSkeptic for March 2, 2011. © 2010-2011 Jason Colavito. All rights reserved. Reproduction of this article is strictly forbidden without the express written permission of Skeptic magazine and the author.