The first chupacabra was not a monster, nor was it a vampire. Originally, the goatsucker was so named not because the creature sucked blood like a vampire but because it sucked milk directly from the teat. The legend originates in a story told about the European nightjar (genus Caprimulgus), a smallish, nocturnal, and insectivorous bird that inexplicably developed a bad reputation, earning it the name “goatsucker.” The first author to record this story is Aristotle, in his History of Animals, written around 350 BCE:

The goatsucker, as it is called, is a mountain bird, larger than the blackbird, and less than the cuckoo. It lays two, or not more than three eggs, and is slothful in its disposition. It flies against the goats and sucks them, whence its name (aegothelas, the goat-sucker). They say that when the udder has been sucked that it gives no more milk, and that the goat becomes blind. This bird is not quick sighted by day, but sees well at night. (History of Animals 9.21.2, trans. Richard Cresswell, 1862)

It has been suggested that the origin of this myth was the observation of nightjars flying through goat pastures in the twilight hours, darting as it is wont to do between the legs of cows and goats. This same story is repeated in Pliny the Elder’s Natural History of 77-79 CE:

“Caprimulgus” is the name of a bird, which is to all appearance a large blackbird; it thieves by night, as it cannot see during the day. It enters the folds of the shepherds, and makes straight for the udder of the she-goat, to suck the milk. Through the injury thus inflicted the udder shrivels away, and the goat that has been thus deprived of its milk, is afflicted with incipient blindness. (Natural History 10.56, trans. John Bostock and H. T. Riley, 1856)

It would not surprise me if the same natural forces responsible for reports of “cattle mutilation”—namely the tendency of soft tissues like udders to decay first—gave rise to Pliny’s report of the decayed udder when the night-jar was seen flying about eating the insects attracted to rotting goat corpses. But this must remain speculation. In his Tracking the Chupacabra, Benjamin Radford (2011) claims “no serious researcher” would link the goatsucker of Aristotle (and thus of Pliny) with that of Puerto Rico (p. 4), but as we shall see, his judgment is too hasty and closes off a profitable line of inquiry into the prehistory of the chupacabra.

It was the authority of Pliny and Aristotle that perpetuated this mistaken bit of folklore about the nightjar, in spite of a failure to observe any actual goat sucking by the bird, which is actually insectivorous. In Pliny, though, we see the beginning of El Chupacabra’s vampire-like reputation, for in this passage not only is the goat rendered blind but also she has part of her body destroyed. In popular superstition, this bird seems to have become confused with a myth about the screech-owl, namely that it attacks infants and suckling animals, mutilating them to obtain blood. Ovid reports the popular misconception about owls in his Fasti, written around and after 8 CE:

There are greedy birds, not those that cheated Phineus’ maw of its repast [i.e., Harpies], though from those they are descended. Big is their head, goggle their eyes, their beaks are formed for rapine, their feathers blotched with grey, their claws fitted with hooks. They fly by night and attack nurseless children, and defile their bodies, snatched from their cradles. They are said to rend the flesh of sucklings with their beaks, and their throats are full of the blood which they have drunk. Screech-owl is their name, but the reason of the name is that they are wont to screech horribly by night.  (Fasti 6.131ff., trans. James Frazer, 1931)

The similarities between the birds—nocturnal, alleged attacks connected to nursing animals, and their terrible screeches—led to the confusion.

In later European folklore, many other birds, real and imagined, became confused or conflated with the ancient goatsucker, and the association with mutilation and blood continued. During the Middle Ages, the nightjar was believed to kill the goats it sucked. In medieval England, the nightjar became associated with the evil spirit Puck, himself associated with the devil. A close association with vampires emerged when Europeans discovered the vampire bat in the Amazon and lumped the goatsucker in with folklore’s other fluid drinking nightmare animals—especially since both vampire bats and goatsuckers were seen together at twilight. The relationship between the goatsucker and the myth of (human) vampires was recognized as early as the 1840s.
In the Americas, interestingly, we know that the nightjar already had a sinister reputation before the Spanish conquest, at least in parts of South America. Among the Makusi in South America, for example, the nighttime cry of the goatsucker (the bird) was believed to be the shriek of evil spirits (L.D. Arnett, “The Soul,” American Journal of Psychology 15, no. 2 [1904]: 145). According to Claude Lévi-Strauss, the goatsucker was simply the “bird of death” in Central and South America, and myths of its evil nature were widespread throughout the Americas (The Jealous Potter, trans. Bénédicte Chorier [1988], chapter 3). For example, among the Maya, they were the guardian birds of the underworld.

Thus, it is not entirely conjectural to suggest that the Native and later Hispanic peoples of the Caribbean came to adopt the negative folkloric association of the goatsucker in all its vampiric glory from Spanish and Portuguese influences (probably in adopting a European language and European animal names) and combined them with indigenous ideas of the goatsucker as an evil demon. These two strands of goatsucker lore neatly encapsulate everything the modern chupacabra represents: a demonic creature that sucks the blood from animals. 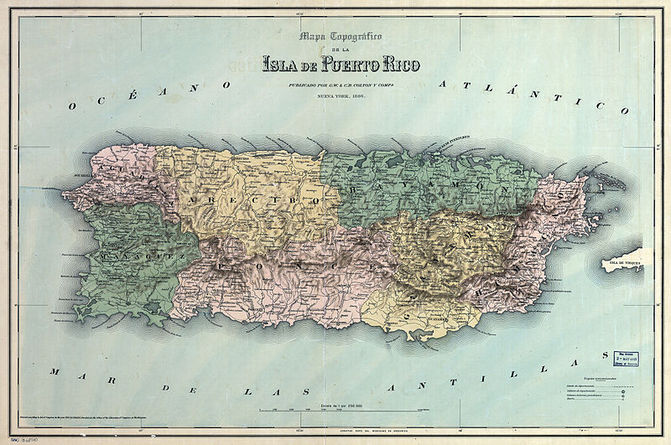 1886 Map of Puerto Rico. The island was a Spanish colony from 1493 to 1898. (Wikimedia Commons)
We know that the term “chotacabra(s)” was in popular usage in Puerto Rico and was well-understood because the Spanish translation of Oliver Wendell Holmes’ A Mortal Antipathy (1885) translates character Maurice Kirkwood’s pseudonym “Sachem” or “Night-Hawk” as “El Chotacabras,” and this translation appears as early as 1951 in the journal Asomante published by the University of Puerto Rico. The term also appears in Spanish dictionaries in use in the region in the nineteenth century.

In 1995, a myth to explain unexplained animal deaths and sightings of strange creatures could have taken many forms. Indeed, before the creature acquired a name, it was described as everything from a bird to a Bigfoot to a (human) vampire, and its victims were everything from chickens to horses to cows—but only rarely goats. Many early attacks were specifically attributed to monstrous birds, including a wave of sightings in 1975. Among the victims in 1995 were eight sheep, three roosters, and a teddy bear. During August 1995, 150 farm animals and pets were allegedly killed, with dozens of additional animals said to have been killed in November, among which were a few goats. Following Tolentino’s sighting, the chupacabra name was attached to the conjectured monster by Silverio Pérez before the end of the year.

It was the application of the specific name of “goatsucker” that helped to define the direction the story of the chupacabra would take. The bird for which it was named was rare; most modern Puerto Ricans would never have seen one. It does not take much conjecture to suggest that the myths associated with the bird could therefore be transferred from the now-rare and mostly forgotten avian to a cryptid that people believed really existed.

When Pérez applied the term “goatsucker” to the monster, he must have been reusing (consciously or not) the term for the legendary bird, for the monster’s victims were not all (or even primarily) goats, and absent an underlying familiarity with the ancient history of the goatsucker legend, the name simply makes no sense and would not have stuck. (The change from the obsolete form chotacabra to the modern form chupacabra, reflecting changes in colloquial Spanish, masked the connection, leading to recent claims that the word did not exist prior to 1995.) Perhaps significantly, Tolentino’s 1995 sighting of the creature later labeled chupacabra, and the sighting that gave rise to the modern myth, included the detail, later dropped, that the monster had feathers. Only later would it become the doglike terror of modern myth.

Whether intentional or not, once the myth of the vampire monster gained that specific moniker, it began to appropriate the Old World and New World associations of its namesake—the demonic, evil nature of indigenous American mythology and the vampiric, mutilating reputation of its Old World version. Even if this association was not a conscious creation, two millennia of history associated with the name and concept of the goatsucker seems to have influenced the development of the myth, not just in Puerto Rico but elsewhere as the tale spread outward, into Mexico, and eventually to the mainland United States. It is therefore safe to say that without Aristotle’s goatsucker, Puerto Rico’s simply would not have taken its current form.