For a guy who has questioned my integrity, allowed idiots on his blog to call me things like a "pseudoscientist," a "fraud" and "racist," and then to "threaten to expose" a 25 year-old lawsuit over a $1,500 agate I was ordered to give back to a guy who then wouldn't take it, you'd think you bring a little better game than this?
-- Scott F. Wolter to Jason Colavito, December 27, 2014

In 1988, future America Unearthed host Scott F. Wolter was sued in Minnesota over claims that he had misrepresented a piece of inexpensive Brazilian agate as more valuable Lake Superior agate. The judge in the case of Petersen v. Wolter (1989) found that in 1988 Scott Wolter misrepresented a chunk of Brazilian agate worth $32.00 as a piece of Lake Superior agate worth $2,500.00 and used that chunk of rock to obtain from the plaintiff a piece of genuine Lake Superior agate in trade. The judge ruled that as “a known and recognized expert on Lake Superior agates” Wolter “knew, or with the exercise of reasonable care or competence, should have known, that said representations were false, or said representations were made by the defendant [Wolter] to the plaintiff [Petersen] without knowing whether they were true or false.”

The ruling did not, as Wolter states, require the return of the valuable agate, which according to court records Wolter had already sold. It required Wolter to return a second agate, a chunk of less valuable Brazilian slab agate traded along with the Lake Superior agate, and entered a judgment of “the sum of $2,000.00” to compensate Petersen for the Lake Superior agate, according to court records.

The documents below I obtained directly from the court in Minnesota. I retain in my files a verified copy with the embossed seal of the court.
Online Version 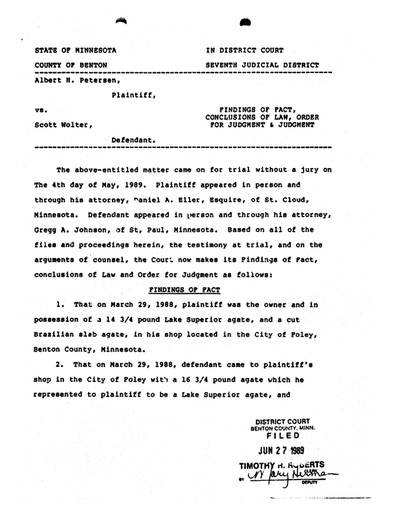 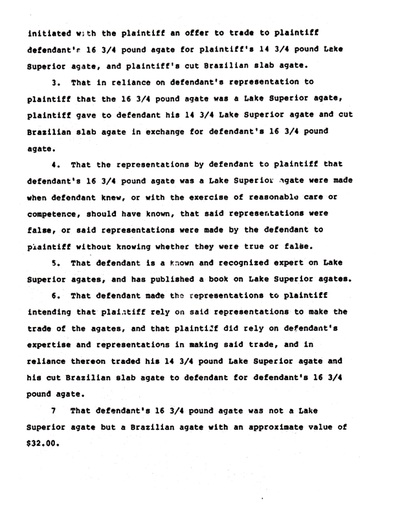 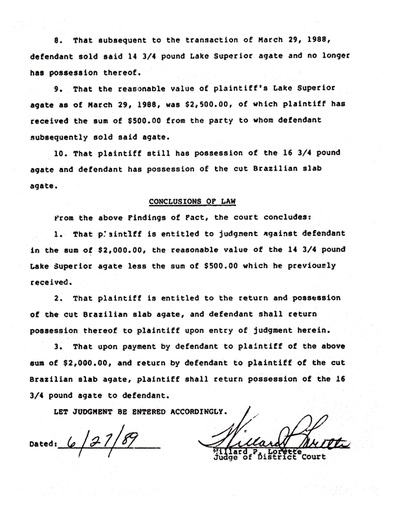