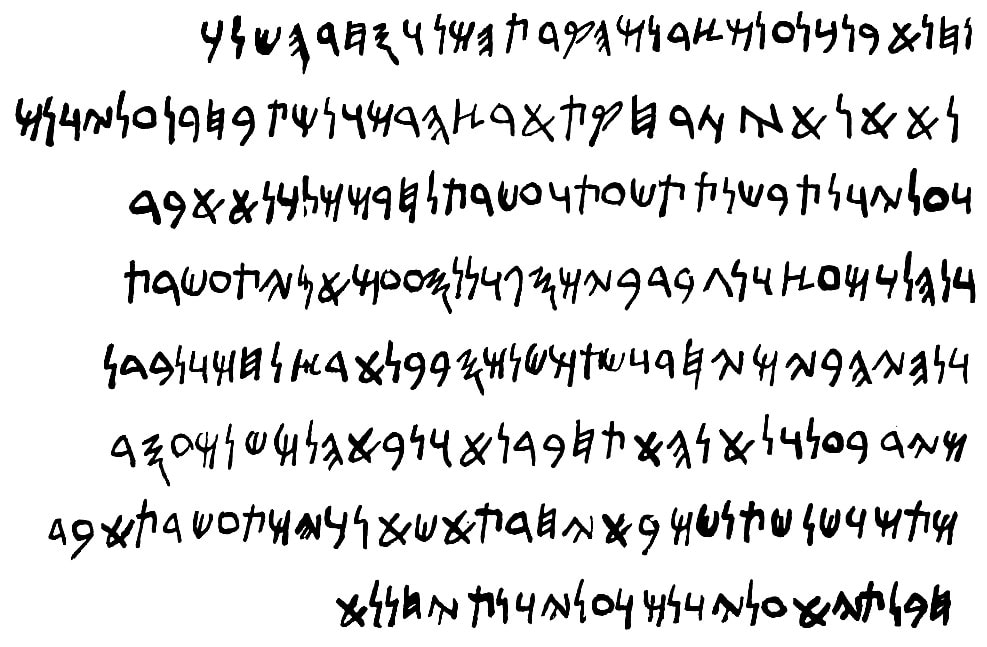 ​This stone monument was erected by Sidonian Canaanites who, to go and found trading posts in a distant, mountainous and arid country, under the protection of the gods and goddesses, set out on a journey in the nineteenth year of the reign of Hiram, our mighty king. They set out from Ezion-Geber, in the Sea of Reeds (the Red Sea), having embarked the settlers on ten ships and they sailed together along the coast of Africa for two years. They were then separated from the fleet commander and dragged away from their companions. Twelve men and three women arrived here on this unknown coast, of which I, the unfortunate Métu-Astarté (servant of the mighty Astarté), have taken possession. May the gods and goddesses help me.
(my trans. from the French of Netto)

As I was having stones transported on my property of Pouso Alto, near the Parahyba, my slaves brought me one that they had already broken into four parts; this stone presented numerous characters that no person understood. I had a copy of them made by my son who knows a little about drawing, and I resolved to send this copy to Your Excellency, as President of the Historical and Geographical Institute of Brazil, to see if Your Excellency or some other person might know what these letters mean. And as I have come to this capital city and have not had the time to present them personally to Your Excellency, I have sent them to him through the post.

I am with all consideration and respect,

[Your] attentive, devoted and obliged servant.

A PHŒNICIAN INSCRIPTION IN BRAZIL.

Journal of the American Geographical Society, vol. 18 (1886), 364-365.
A PHŒNICIAN INSCRIPTION IN BRAZIL. — The story of a learned imposture is told by Dr. Netto, director of the National Museum at Rio de Janeiro, in a pamphlet inscribed to M. Ernest Renan.

At a meeting of the Historical and Geographical Institute of Rio, on the 13th Sept., 1872, a letter was read from Mr. Joaquim Alves da Costa, of Pouso Alto, Parahyba.

This letter enclosed the drawing of an inscription on a stone, said to have been found on the writer's property. Dr. Netto, to whom the drawing was submitted, recognized the characters as Phœnician and, though not very strong in Oriental learning, undertook to translate them. There was nothing extravagant in the supposition that Phœnicians or Carthaginians had landed in Brazil, and Dr. Netto worked at his task with energy. Its difficulties were many and great, and he became eager to see the stone itself; but to do this it was first of all necessary to find Mr. da Costa.

The name of his property, Pouso Alto, is one so common in Brazil that it gave no help; and to find Parahyba was not much more easy.

There are in the empire two rivers named Parahyba. One of these is in the province of Parahyba do Norte; the other flows through three of the southern provinces; and between the two regions there are 15 degrees of latitude.

Mr. da Costa was nowhere to be found.

The continued study of the inscription confirmed the suspicions Dr. Netto had begun to entertain. One phrase, Yth alonim vulonuth, was evidently taken from the few Carthaginian words in the Pænulus of Plautus; and Dr. Netto began to ask himself what Oriental scholars were known to be in Rio.

There were but five; four foreigners and one Brazilian. The Brazilian he had known for many years and did not suspect. To each of the others he sent a copy of the inscription with his translation, asking at the same time for corrections and criticisms. He compared the handwriting in the answers received with that of Mr. Da Costa.

In this way he detected the author of the mystification; and he now publishes the story, with the facsimile of the apocryphal inscriptions, because letters of inquiry on the subject still reach him from time to time.

It is well that impostors should be exposed, but men differ in their appreciation of the methods to be adopted for the vindication of the right; and the one chosen by Dr. Netto does not recommend itself.