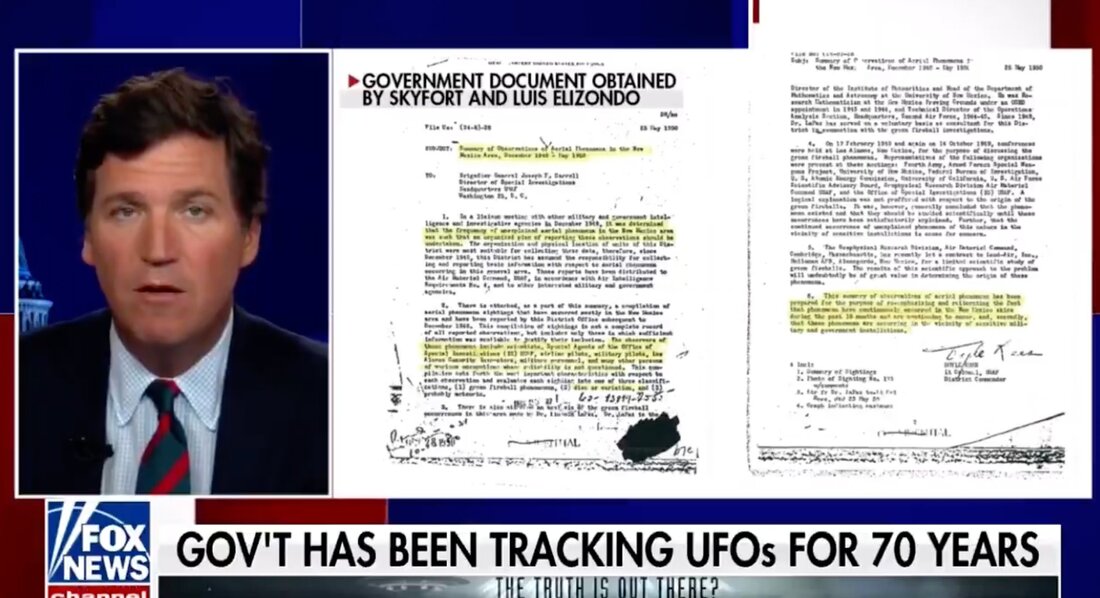 SUBJECT: Summary of Observations of Aerial Phenomena in the New Mexico Area, December 1948 - May 1950

1. In a liaison meeting with other military and government intelligence and investigative agencies in December 1948, it was determined that the frequency of unexplained aerial phenomena in the New Mexico area was such that an organized plan of reporting these observations should be undertaken. The organization and physical location of units of this District were most suitable for collecting these data, therefore, since December 1948, this District has assumed the responsibility for collecting and reporting basic information with respect to aerial phenomena occurring in this general area. These reports have been distributed to the Air Material Command, USAF, in accordance with Air Intelligence Requirements Ho. 4, and to other interested military and government agencies.

2. There is attached, as a part of this summary, a compilation of aerial phenomena sightings that have occurred mostly in the New Mexico area and have been reported by this District Office subsequent to December 1948. This compilation of sightings is not a complete record of all reported observations, but includes only these in which sufficient information was available to justify their inclusion. The observers of these phenomena include scientists, Special Agents of the Office of Special Investigations (IG) USAF, airline pilots, military pilots, Los Alamos Security Inspectors, military personnel, and many other persons of various occupation whose reliability is not questioned. This compilation sets forth the most important characteristics with respect to each observation and evaluates each sighting into one of three classifications, (1) green fireball phenomenon, (2) disc or variation, and (3) probably meteoric.

3. There is also attached an analysis of the green fireball occurrences in this area made by Dr. Lincoln LaPaz. Dr. LaPaz is the


Director of the Institute of Meteoritics and Head of the Department of Mathematics and Astronomy at the University of New Mexico. He was Research Mathematician at the New Mexico Proving Grounds under an OSRD appointment in 1943 and 1944, and Technical Director of the Operations Analysis Section, Headquarters, Second Air Force, 1944-45. Since 1948, Dr. LaPaz has served on a voluntary basis as consultant for this District in connection with the green fireball investigations.

4. On 17 February 1949 and again on 14 October 1949, conferences were held at Los Alamos, New Mexico, for the purpose of discussing the green fireball phenomena. Representatives of the following organizations were present at these meetings: Fourth Army, Armed Forces Special Weapons Project, University of New Mexico, Federal Bureau of Investigation, U. S. Atomic Energy Commission, University of California, U. S. Air Force Scientific Advisory Board, Geophysical Research Division Air Material Command USAF, and the Office of Special Investigations (IG) USAF. A logical explanation was not proffered with respect to the origin of the green fireballs. It was, however, generally concluded that the phenomena existed and that they should be studied scientifically until these occurrences have been satisfactorily explained. Further, that the continued occurrence of unexplained phenomena of this nature in the vicinity of sensitive installations is cause for concern.

5. The Geophysical Research Division, Air Material Command, Cambridge, Massachusetts, has recently let a contract to Land-Air, Inc., Holloman AFB, Alamogordo, New Mexico, for a limited scientific study of
green fireballs. The results of this scientific approach to the problem will undoubtedly be of great value in determining the origin of these phenomena.

6. This summary of observations of aerial phenomena has been prepared for the purpose of re-emphasizing and reiterating the fact that phenomena have continuously occurred in the New Mexico skies during the past 18 months and are continuing to occur, and, secondly, that these phenomena are occurring in the vicinity of sensitive military government installations.