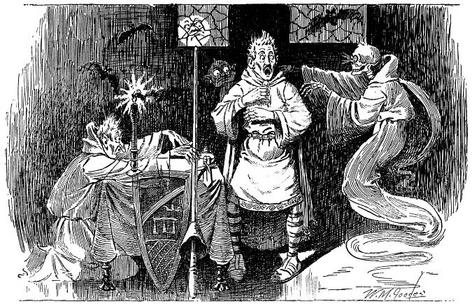 The supernatural was the subject of great controversy in the nineteenth century, with scientific skeptics casting doubt on its existence and believers in Spiritualism proclaiming its manifest entry into the world of men. This anonymous 1897 article from THE SPECTATOR, as reprinted in the November 1897 Current Literature, the Reader’s Digest of its day, explores late Victorian ideas about the supernatural and the literature of horror derived from it. This article and many more appear in my anthology A Hideous Bit of Morbidity.

Both those who believe and those who disbelieve in the notion that the veil between this world and the other is capable of being lifted agree in one thing. They all recognize the fact that most people feel fear, or something akin to fear, at what they believe to be the occurrence of supernatural phenomena. There is here, therefore, a piece of ground which may be explored without any begging of the question as to whether the fear is caused by real ghosts or by trickery, by rats and water-pipes, or by genuine glimpses of the people of another world. One would like to know whether the fear felt is akin to that experienced when a man is frightened by a runaway horse or a fire or any other imminent risk of life, or whether it is something different in kind. Speaking broadly and without any minute consideration of the facts, one would say that ghost-fright did differ in kind from the fright that comes from active danger. Most people have, we imagine, at some time or other in their lives experienced that eerie, uncanny, creepy feeling which is associated with the possibility of contact with the supernatural. Yet few would declare that it was in any sense connected with the dread of loss of life or limb. The man or woman who wakes up in the middle of the night and hears strange noises—thumps, raps, clangs, and creakings—or sees lights or feels the touch of unseen hands, is probably very frightened, but the sense of bodily fear is not present. There is no dread of being killed. People in the agony of terror caused by dangerous accidents constantly call out that they are going to be killed, but we doubt if that is ever the case in the fright caused by haunted houses. . . . The fear caused by what is supposed to be a supernatural agency seems, then, to have in it some element not found in ordinary fear. If and when the haunting phenomena cause fear they seem to give a shock of quite special keenness.

Another strange thing about the dread of the supernatural is its greater power of transmission. One may, no doubt, read about hairbreadth escapes with a pleasing thrill of danger, and very sensitive people may even find it “trying” to hear how the hero of a mountain climb crawled along a ledge of rotten rock with a two thousand feet drop below and a sheer wall of cliff above, but no one is really terrified by this in the way that sensitive people are terrified by reading or hearing ghost-stories. People susceptible to such impressions not unfrequently find themselves in the position of Sir Walter Scott and Hannah More, who sat up telling ghost-stories till they were both afraid to go to bed. Unquestionably the fear which we call “creepiness” is much more easily kindled at second hand than the good honest dread of having one’s skull split. Yet another curious fact about the form of fear we are discussing is its admitted unreasonableness and want of sufficient cause apparent to account for it. If a man is asked why he is afraid of standing in the line of fire when soldiers are shooting, or of doing any other dangerous thing, there is no sort of mystery about his answer. He tells you at once, “I am afraid of doing this or that because I don’t want to be killed.” If you ask him why he is afraid of sleeping in a haunted room, as in many cases he undoubtedly will be, even though perfectly sane and sufficiently brave, he will be unable to tell you. He will probably declare that he does not believe in ghosts, and does not believe, indeed, in any supernatural phenomena being permitted. Yet he will, if he is honest, add that there is no sort of uncertainty about his objection to sleeping in a room believed to be haunted. He may say, of course, that he could force himself on good grounds to submit to being frightened, but he will not deny the fright. If you ask him, further, what are the consequences of which he is afraid, he will, as we have said, be unable to tell you. He will admit that there is no fear of the figure said to haunt the room injuring him in any possible way, and he will laugh at the notion of low voices, or loud explosive raps, or touches from cold fingers doing him bodily damage. In the end, indeed, he will be forced to admit that what he is really afraid of is being frightened. “Experience tells us that these things, whatever they are, cause a very unpleasant form of terror in the human mind, and experience is backed up by a strong instinctive feeling in most men’s minds. I don’t know in the least why these things should cause alarm, but as they do I intend to avoid them.” . . . When a normally constituted man is made subject to an illusion either by being influenced beforehand by thrilling accounts of what he is likely to see, or else by some curious set of accidents and coincidences, it is only natural that he should be much disturbed in body and mind. The perfectly healthy organization abhors and resists illusions, and therefore when it is subject to them by some accident the reaction is very strongly marked. . . .

There is yet another explanation of the mystery surrounding this dread of the supernatural which may be worth considering. It may be that man has been endowed with this almost universal horror of the supernatural because he was not meant to peep behind the veil. It can hardly be doubted that mankind in general would not be doing their true work if they were perpetually engaged in efforts to lift that veil. For what purpose was the veil interposed if not to prevent such prying? But granted that it would be a hindrance to man’s development to traffic with the other world, or to learn too much about it at first hand, would not man be very likely to have developed a keen instinctive horror of any contact with the unseen world, just as many animals have an instinctive horror of plants that will injure them? Be that as it may, . . . why so many of us should be afraid of things which we know will, under no circumstances, do us bodily harm, and which most of us sincerely believe have no existence whatever, is in any case a very curious problem.

Source: “The Dread of the Supernatural,” Current Literature: A Magazine of Contemporary Record XXII, no. 5 (November 1897): 462-463.
Photo credit: Illustration from Bill Nye's History of England (1900) / Liam's Pictures from Old Books.