On the Giants who Came from the Blood of the Titans 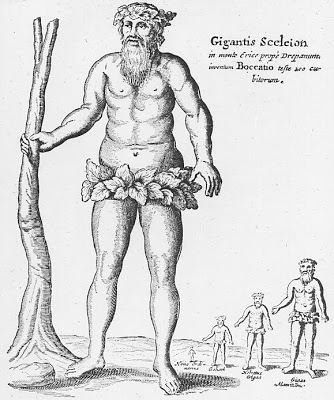 Relative size of Boccaccio's giant, as given by Athanasius Kircher
... Many things must be said if we wish to solve the riddle of these fictions, but before anything, we must say that it is not entirely a fiction that there existed Giants, that is, creatures with the form of men but exceeding them greatly in stature. And indeed, it appears this was the truth, and in these days a fortuitous event in the town of Drepana (Tripani) in Sicily clearly shows this: For, in the foothills of the mountain that rises above Drepana, not far from the town, a few peasants digging the foundation for the construction of a rural house came upon the entrance to a certain cavern. When the diggers, with lit torches, entered in eagerness to see what lay within, they found a grotto of the greatest height and breadth. Continuing into the grotto, they saw opposite the entrance a seated man of immense magnitude, of whom they were much frightened. They quickly took flight and left the cave; nor did they cease their running until they reached the town, announcing to those they met what they had seen.

But the citizens were in wonder, and they wished to see what this evil was, so after lighting torches and gathering arms, they left the city together as if against an enemy; and more than three hundred entered into the grotto, and no less dumbstruck, they saw what the workers had reported. At last, they came closer, after they determined that the man was not alive, and they saw him sitting on a seat, resting with his left hand on a staff of such height and thickness that it exceeded the mast of a great ship. So, too, was he a man of a size unseen and unheard of, and neither were any of his parts gnawed at or mutilated. And when one of them stretched out his hand and touched the upright staff, the staff immediately collapsed into ashes, but there remained, as if stripped of its clothing, another staff of lead rising toward the hand of him holding it. Examining the staff to their satisfaction, they determined the lead had been poured into the staff in order to increase its weight, with respect to which, after they had weighed it, those who saw it said it weighed fifteen of Drepana’s hundredweights, of which one of these weights is equal to a hundred common pounds. The body of the man also fell apart upon being touched, and it turned almost completely to dust. When this dust was handled with some of their hands, three teeth of monstrous size were discovered still intact, with a weight of three rotuli, that is one hundred common ounces.

To preserve evidence of the giant they had found and to create an everlasting memory for future generations, the Drepanites bound up the remains in an iron net and hung them in a church within the city dedicated to the Annunciation of the Virgin and known by that name.

And moreover, a part of the front of the skull was found still solid and capable of holding several bushels of corn. So, too, was found one of the leg bones, of which the fullness of age had caused to reach a state of absolute rottenness; however, those who can determine the total height of a man from the size of even the smallest of his bones calculated from this remnant that his size was two hundred cubits or more.

It was suspected by some of the most prudent that this was Eryx, an extremely powerful king from the area, the son of Butes and Venus, who was killed by Hercules and afterward hidden in this mountain. But he was thought by some to be Entellus, who in the funeral games given by Aeneas long ago for his father Anchises had killed a bull with his fist. Still others thought him one of the Cyclopes, and quite possibly Polyphemus, of whom Homer says much. Vergil wrote of him thus:

Scarcely had he spoken when we saw on the mountaintop
Polyphemus himself moving with his enormous bulk amidst the cattle
And reaching for the well-known shore--
A huge, dread monster whose eye had been put out,
And a pine cut down by his own hand guides and steadies his footsteps.

And a little bit later he continues:

Gnashing his teeth with a groan, he steps through the sea,
Now at full height, while the towering waves failed to wet his tall sides.

And he says many other things that go to show the magnitude of the Cyclopes, suggesting they belong more toward the truth rather than the hyperbole which many decide to use in this matter.